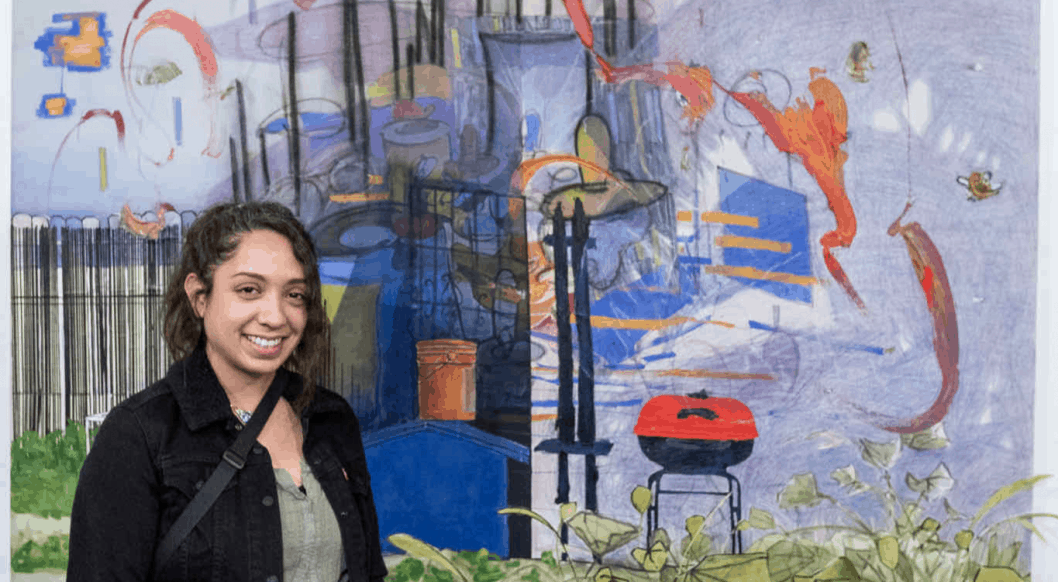 Juliana Bustillo was born in Brownsville, Texas and until recently, didn’t know much about her family history. “It’s so sad – the things you don’t know,” says Juliana of her mother’s journey to America. An immigrant from Honduras, Bustillo’s mother sought asylum in the U.S. in the late ‘80s, long before Brownsville and other border towns would become a backdrop for the ongoing immigration crisis.

“She never spoke about it, but one day she called me into the living room like it was story time.” Bustillo’s mother explained that things were much different when she sought asylum – that they were fed and given something to drink and that “she was allowed to walk around” while focusing on keeping all her court dates.

“She was really young and she crossed the river by herself. She didn’t know how to swim. She said to me, ‘Imagine if this was happening today. We would have been separated.’”

“The best thing about being an artist is that you get to slow down time.”

A few years later, Bustillo and her mother boarded a Greyhound bus and made their way to Los Angeles where Bustillo has lived ever since.

When asked if her family history has made its way into her art, Bustillo replied, “Not so much with the images. To me, I feel like if I paint about it, it gives it more power.”

Bustillo describes her art as “abstracted cityscapes, doodles, with an anything goes motto. Because when it’s anything goes, you can MacGyver the shit out of it!”

She was surprised to learn she had won the Not Real Art grant. “Honestly, I applied at the last minute. I’m connected to Art Share L.A. I've known about them since I was an undergrad. I had already done a couple of shows with them. They're pretty amazing and everyone knows them as a great nonprofit. They send out newsletters [with] artists’ opportunities. I was reading all the open calls and the Not Real Art grant sounded really neat. But then the application was due in something like three days!”

Pressing deadlines led to a discussion on the role procrastination plays in the life of an artist.

“It’s like we totally do that to ourselves on purpose,” says Bustillo. “Like we like to suffer or something, right? I don’t know what that is!

“The application [process] was pretty great. They asked some straightforward questions. I got thrown off at the end though, because of the images. I was so ready to have 10 images to throw at them and they were like ‘pick one image that best represents you.’ That took me a day or two.”

Juliana Bustillo: “There is no such thing as beauty.”

Bustillo’s take on the definition of beauty in art, “Beauty seems to be very artificial. I feel like if it can be defined, you know, it's not real. This is my own made up philosophy – there is no such thing as beauty.”

Bustillo realized she would become an artist when she was in high school. “I was kind of a lost kid. I didn't really know what to do. I ditched a lot, but then I knew I wanted to do something because I just thought – I don't want to live like this.

“Originally, my intention was to be a preschool teacher or something like that and then I had an art teacher ask me if I was going to major in art. She said it would be a waste if I didn’t. I don’t know if she still remembers me, but I remember her.”

As for her friends and family’s opinion of her art, Bustillo says, “They don’t get it. They don’t know what I’m doing.” When asked what her peers would say about her, she lets go of an easy laugh. “They would probably say I’m a hard ass and that I work too much.”

Bustillo’s process begins with “more of a mood than a vision.” She also considers it a kind of problem-solving, to invent new techniques, asking herself, “What is a painting? What can this painting be? Eventually, you just let go. It's almost meditative in a way.”

She recently worked on a project for a friend’s show where the theme was postcards. “I started thinking about when I travel. I obviously go to museums and they always have the really nice postcards of their paintings and I thought, I'm going to recreate a miniature version of one of my paintings! So then I was like, how do I do that? So then I just built the canvas, I stretched a panel; I did everything. I showed it at Art Share LA and it got sold and now it’s somewhere in Washington.”

“I really love Japanese woodblock prints. I think they're amazing. The color, the lines, the structure, the way they compose their space, and the way they kind of ignore the rules. And then Chinese scroll and landscape paintings are amazing to me. I really love the simplicity. It's all about the lines. Artists like Gerhard Richter are my heroes. As far as contemporary artists, right now I am all about Laura Owens.”

Bustillo finds that the most challenging thing about being an artist is “knowing what part of our community you belong to.” Taking a moment to observe the artists’ career path and how it’s playing out in her network, she adds, “You have to be very careful and be like okay, what exactly am I asking my art to do for me? Where is it taking me? That’s one of the hardest things.”

When she’s not in the mood to paint, Bustillo waits it out in her studio. “It's so sad, but when I'm having a bad time I run away to my studio. I’ll just sit there. I share a studio so I'm going to wait for everybody else to leave. I'm going to smoke my weed and drink my beer because I can't paint today and I'm gonna stare at this for a moment, ‘cuz sometimes, you know, like after a glass of wine, or after a beer, the edge comes off and then you're looking at your painting and you’re like, ‘I’m okay. I’m okay.’”

Bustillo says she has no regrets about living the artist life. Rather, she says she’s created her “own utopia” and that the best thing about being an artist is, “You get to slow down time. Time does not exist for you.”