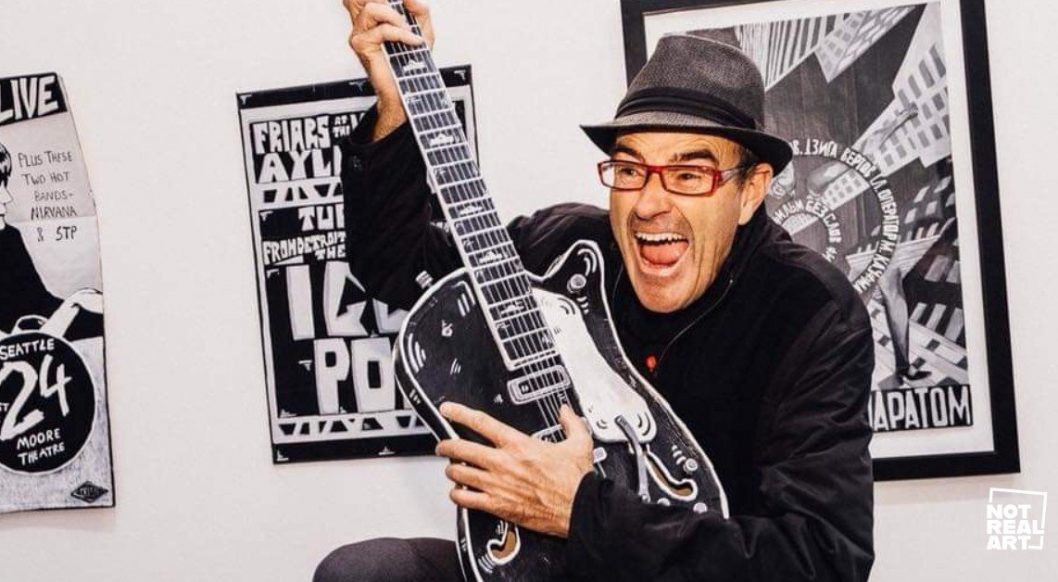 Some people are extraordinarily unique and change the game completely. We here at NOT REAL ART are pleased to present last year’s episode on Juxtapoz Magazine founder and lowbrow art enthusiast Greg Escalante. Escalante was a bona fide maverick and trailblazer, carving out a space where so many of us could feel at home.

For this episode, originally aired April 9, 2021, some 30 artists and friends gathered to record personal audio messages in honor of Escalante’s birthday. To celebrate the episode’s one-year anniversary, we’re baking a cake, lighting the candles, and remembering Escalante’s impact for one more turn around the sun.

Juxtapoz, the publication Escalante co-founded with cartoonist Robert Williams, is still a leading work in the alternative and underground art space. Escalante's legacy is about far more than the magazine—it’s about the community he built and the lives he touched. During the show, you’ll hear tributes from many of the artists who were impacted by Greg, including Robert Williams, Shag, Shepard Fairy, Elizabeth McGrath, and Chaz Bojórquez, just to name just a few.

The episode is hosted by NOT REAL ART founder, Scott “Sourdough” Power, Heidi Johnson of Hijinx Artist Management & PR, and Wendy Sherman, who acted as Escalante’s personal assistant and gallery manager. Johnson and Sherman share their fondest memories of Greg, like his love of ice cream, their travels, and what a day spent with him would look like.

Tune in to this week’s episode to hear the profound impact Escalante had, not just on the art world, but on the many weird and wonderful people in it.

“Every once in a while, somebody comes along that really changes the game. A truly unique, one-of-a-kind person. Those mavericks, those trailblazers that we need to make history. And so, today, I thought we’d take time to honor one of those mavericks, one of those amazing, unique, one-of-a-kind human beings, Mr. Greg Escalante.” — Sourdough [0:03:10.0]

“Until Greg, no-one had really ever invested anything in me. And he showed me that there was this whole other world out there you could survive and become successful in. He genuinely believed I had talent and gave me a chance, and that was huge. And that was Greg. He was the foundation for so many artists. He was always networking. Always networking. But never, ever for himself, always everyone around him. Sometimes he would just call me at the crack of dawn and have this whole future planned out for everyone. For me, for everyone he worked with and if you put in the work, he'd make it happen. He made dreams come true. The legacy he left behind is monumental. And it's not even the art. It's the community he built for all of us. And on his birthday, I think of all the gifts that he gave us. The gift of his optimism, the gift of a place to be ourselves, to be free to create without judgment, and confidence that good things will happen because of it. I really miss him.” — Elizabeth McGrath [0:35:00.0]

“After years of an art market that felt very exclusive and not inclusive, I think he was always ahead of his time in that he wanted everyone to enjoy art and everyone should be invited to the party. And whether you can buy art or not, you should be able to feel it and live with it. He really broke down that barrier too.” — @hijinxpr [1:41:17.0]

“Besides all the great stuff that he did for the scene and for the movement and the community, on an individual level, he really helped a lot of people be the best they could be.” — @sanjusan[2:15:26.0]