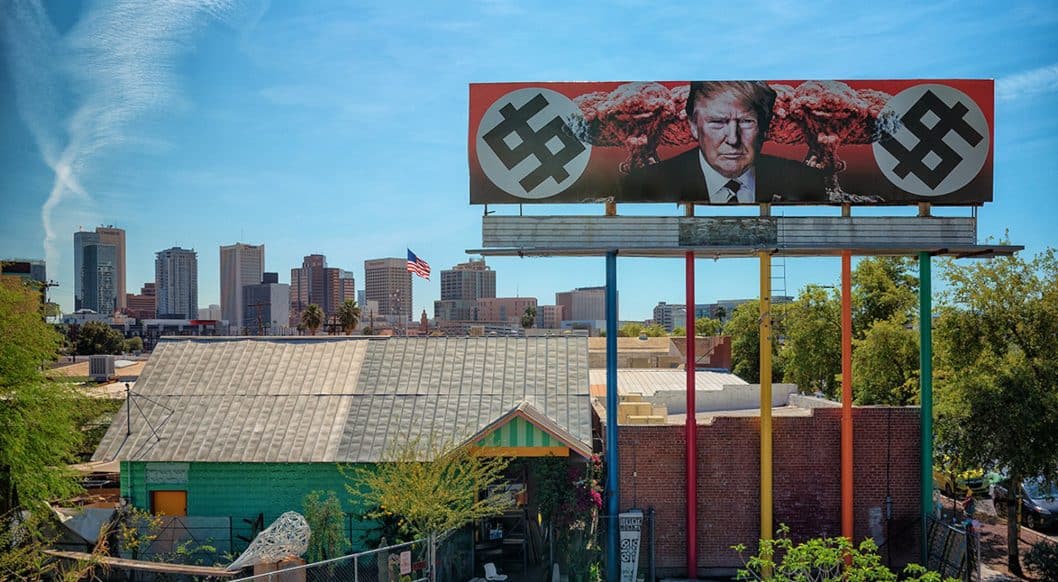 Karen Fiorito is no stranger to being different and in full view. Her controversial ‘Trumpocalypse’ billboard in downtown Phoenix gained international media attention. In high school, she was bullied for standing out. “I was kind of punk rock. Kids would pick on me because I was different and looked different.”

So when Fiorito found out she’d won the Not Real Art grant, she was honored to be celebrated for being different. “I thought – this is perfect for me. Not that it's not real but I feel like other people see it and are like oh, that's not real art.”

Fiorito was born in Norristown, Pennsylvania and raised by her single mother who was “trying to raise three kids. We were poor. I went to a really poor high school that had one art class. It was terrible. I got picked on because I was different. I got into a fight with some boys, so they expelled me.” Fiorito started attending a high school in her father’s neighborhood where she had her pick of art classes. “They had art and ceramics and drawing, photography. They had screen printing. They had so much. I was just blown away by it all. I took everything!

“I think the only reason I got into art was because of high school. My art teacher said, ‘I love the way you dress. You're expressing yourself through your clothing.’ She was really supportive of me and said I should go to art school. It was one of those things where I didn't know what I was doing with my life and it sounded like fun.”

“The best thing about being an artist is being able to express something that needs to be expressed.”

As a child, Fiorito was inspired by her Aunt Francis. “I remember staying with her for weeks and making art every day and cooking and sewing. She taught me to paint and draw, but I don't think I really got serious until high school when I started taking ceramics and photography. And then I went straight from high school to art school, to college, and then took eight years off to kind of work and travel. Then I went to grad school in Arizona. From there I moved to LA and started my own business.”

Fiorito started out with her own print-making business out of a studio downtown and has worked for Pier One, Shepard Fairey, and the Getty Museum when she injured her back and began to focus more on her own work.

A self-proclaimed news junkie, Fiorito says she likes to “keep up on current events. I try to get inspired by what's going on in the world. Recently, I've been trying to look for the positive because I had a dog die and a cat die and just a lot of traumatic stuff. I was in a place where I didn't want to do art anymore. Everything I tried to do came out as skulls and just doom and gloom. So recently, I've been working on a series of women who are changing history. I’m inspired by The Squad and Ruth Bader Ginsburg and people who are fighting to make a change, especially women activists. I’m just trying to focus on those people, because I feel like those people are the ones who get it.”

“Everyone told me ‘that’s not real art. You can’t do political art.’”

When Fiorito was in art school, her political art was met with some criticism. “Everyone told me ‘that's not real art. You can't do political art.’ One of my professors said, ‘It's too temporal and it's always changing.’ So you know, you make fun of George Bush and in 10 years, no one's going to remember? I don't agree with that, because a lot of my pieces I did ten or twenty years ago are still relevant today.”

“I have a really hard relationship with monetizing my art because that's never been the reason why I did it. For me, to profit off of social injustice, to profit over other people's suffering – it never felt right. I did it as a protest or to encourage people to protest or to inspire people in some way. So a lot of times, I give my images away for free. I don't copyright them. I just let people take them and use them in whatever way they want. And people use them all the time. I'm blessed that I don't have to really worry about surviving as much as I did anymore. As I get older, I'm also becoming more and more anti-capitalist. Just seeing what it's doing to the environment, to animals, and society in general – putting kids in cages and selling them for money and things that it's doing to the planet. I’m becoming more of a socialist.”

Fiorito recently relocated to the San Diego area and though she misses L.A.’s diversity and her friends, she shared, “I think one of the things about getting out of LA and getting into nature is that it gives you a different perspective on everything. I live on the side of a mountain. I wanted to get back to nature. I've lived in a big city all my life. It gets a little hard sometimes when you're just packed in a car and you go from crowded place to crowded place.”

“The best thing about being an artist is being able to express something that needs to be expressed, that you feel is not being expressed. And people say, ‘Oh, my God, thank you for saying that because I feel the same exact way.’ To have that kind of validation of not being alone, to unite people and bring people together. I've gotten to meet a lot of amazing artists and people just from the work I do. I feel blessed to have some sort of community out there. Even though I am kind of isolated, I do feel part of something bigger than myself.