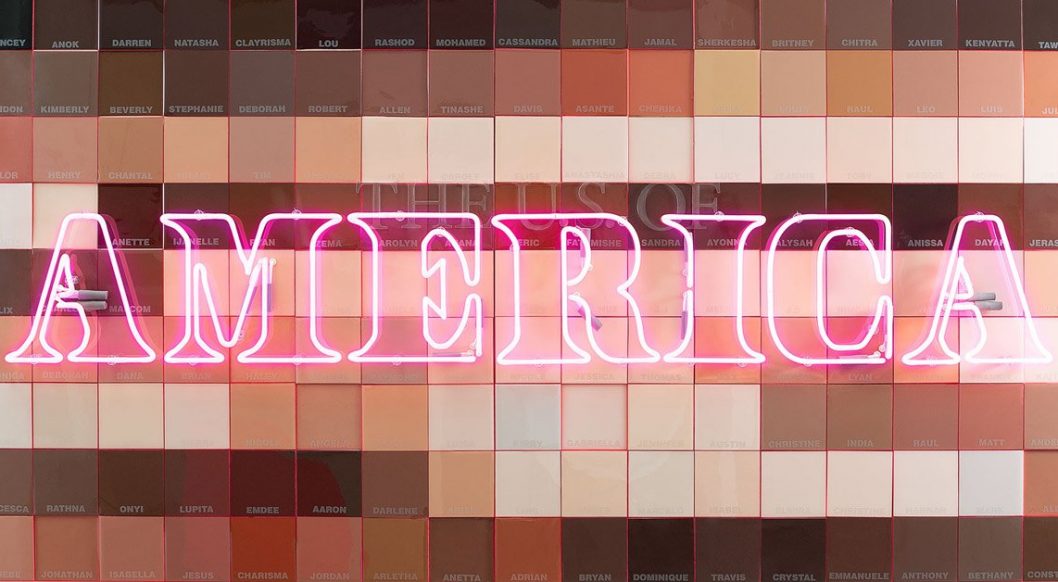 ‘América Utópica’: Karen Navarro Constructs Her Own Shining City on a Hill

Splashed in neon pink, the bisque, bone, sand, and cinnamon squares of América Utópica represent a major color departure for its Argentine-American artist, Karen Navarro. On view in Houston through June 26, 2022, América Utópica explores changing US demographics through a range of crowdsourced skin tones, census data, and language.

Known for her colorful portraits—awash in petal pinks and swimming pool blues—Navarro shifted gears when the pandemic forced her models into lockdown. “When COVID happened, I couldn't take pictures of people, but I still wanted to work,” she tells NOT REAL ART. Citing the brutal murder of George Floyd as a turning point, Navarro abandoned traditional portraiture altogether when she started collecting material for América Utópica. “Sometimes I have ideas, or something that I want to say through my work, but I need to wait for the right moment,” she muses. “What happened with Black Lives Matter pushed me to make this work.”

Navarro, who immigrated to the US from Argentina nearly a decade ago, approaches her work with an empathic eye. Identity—perceived, conferred, or declared—is central to her mixed-media projects. “My work is informed by my experience of being an immigrant and the ways in which I see identity as a cultural and social construct,” she says. “My multimedia practice investigates the intersections of identity, self-representation, race, gender, and belonging.” Blending photography and sculpture, Navarro’s past work reveals the beauty of female imperfection (Soft Objects), ponders the mutability of online identity (El Pertenecer en Tiempos Modernos), and highlights the depth of experience found in immigrant communities (The Constructed Self).

Lost in Translation: A New Vision of the Americas

Crystallized in nude hues, América Utópica whittles Navarro’s identity-centered vision down to a fine point. Stripped of recognizable facial features, the works rely on audience participation nonetheless. “I’m amazed at the response,” says Navarro, who started collecting images of arms, hands, and faces through Instagram, later zooming in on a single patch of skin to create a pixelated effect. “By reducing the submitted skin tone photographs to colored squares, I look to convey our similarities and erase our differences as people,” she says of this choice. Now a Google form on her website, the call to join América Utópica is open to all, regardless of race, age, gender identity, or geographic location.

Language also plays a central role in América Utópica; Navarro’s sparse text humanizes its participants while skewering antiquated colonial attitudes. “I wanted [the title] to be in Spanish,” she says, explaining that the phrase lacks an English equivalent. “It doesn’t translate well, but I chose it because ‘America’ in Spanish means the whole continent, and ‘America’ for the US means only the United States. When I came to the US, I kind of lost the right to call myself an American, or say that I’m from the Americas. People here say, ‘This is America,’ and that kind of leaves you out.”

Further complicating the picture, Navarro only recently discovered her indigenous roots—her family are descended from the Mapuche, an ethnic group native to parts of Chile and Argentina. “I was super happy with this news, because it gave me a sense of belonging that I didn't have before. Before I felt that I didn't fit in any place. Argentina is mostly white, but I am not.” Drawing parallels between racial arrangements in the US and her home country, Navarro explains that minorities in Argentina still struggle for basic rights. “It’s not really talked about, the racism, but that doesn’t mean it doesn’t exist. It’s just hidden in plain sight.”

América Utópica: We Are Made of the Same Clay

Navarro expresses these thoughts in “Somos Millones (We are Millions),” an LED-illuminated work crafted from paint, wood, and obsidian. Used widely by pre-Columbian civilizations, obsidian’s mirrored surface reflects both the maker, and the viewer. “In using the stone, I create a metaphor that includes my own reflection,” Navarro muses. An antidote to baffling US census forms—“I’m not white, but that’s as close as I could get”—“Somos Millones” reaffirms the artist’s identity with every matched gaze.

The buzzy neon centerpiece, “Shine America 2043,” casts hot pink light across the exhibition. The work is a direct interpretation of the 2011 US census data prediction: that all non-white groups combined will become the majority by 2043, surpassing the white population. “Each square represents the skin tone of a person who lives in the United States,” Navarro explains. “Additionally, the participant’s first name is imprinted on each square. The work aims to show the diversity of the United States, to be a positive message of hope, and to question the actual space that is given to people of color in society.”

The third and final work in América Utópica is also its most recent addition. Created in 2022 and mounted behind “Somos Millones,” “Hechos del Mismo Barro (We are Made of the Same Clay)” is a photographic mural representing Houston in all its flesh-toned glory. Arranging the tiles in the order they were received, Navarro avoids hierarchy while emphasizing fundamental similarities in the city she calls home. “The photographic mural is an ever-evolving work that changes according to the demographics of the city for which it is produced,” she shares. “Ultimately, the work becomes a demographic portrait that represents diversity across regions.”

Curated as a sneak peak, the América Utópica on view in Houston is just one iteration of the project. The current version, with just three pieces, represents a powerful triad of influences in Navarro’s life: her past (“Somos Millones”), her present (“Hechos del Mismo Barro”), and her shared future (“Shine America 2043”).

With plans for an expanded show in 2023, Navarro is “excited to see how this project evolves, and how it's going to look in each different city.”

América Utópica is on view in Houston through June 26, 2022. To see the exhibition in person, please schedule an appointment directly with Karen Navarro here. To view América Utópica online, please click here.