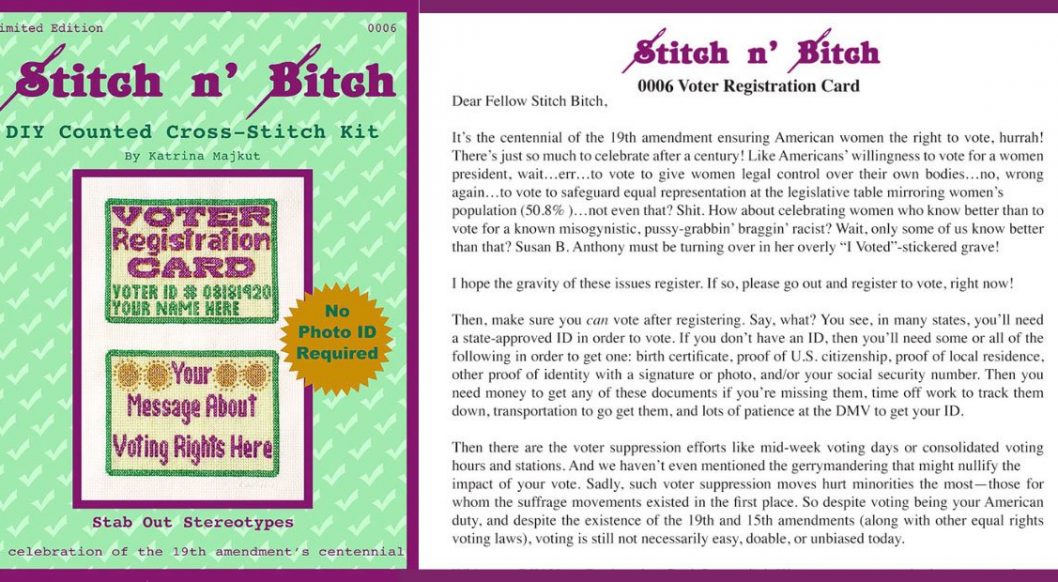 Why stitch when you could stab? That’s the unspoken philosophy behind Katrina Majkut’s Stitch ‘n’ Bitch DIY Embroidery Kit Project, a collection of cross-stitch kits offering catharsis in the face of prejudice and discrimination.

“At the very least, creators get to legally stab something and release some pent up fury without harming anyone,” says Katrina, who created the inaugural kit, “Woman Card,” to reject the gendered stereotypes associated with embroidery. “[Embroidery] carries a lot of unfair stereotypes regarding domesticity and femininity, which has a big impact on the roles and identities of women (and anyone else for that matter) […] as an artistic medium, it has been present in all cultures across the world throughout human history, too. Despite that, if you go to any major craft store and look at the embroidery kits consumers can buy, they almost exclusively promote white, Western, and conservative narratives and motifs. Those kits reinforce identity stereotypes, neuter social engagement, and discourage unique expression.”

With a goal to scrap the mass-produced embroidery kits found in store chains and replace them with “creative outlets of social change,” Katrina expanded her project to include creators with different perspectives and experiences. “The project collaborates with other artists, writers, and proactive citizens to each design a kit that represents discrimination and bias they have personally experienced, or addresses a political or social issue of deep, personal concern,” says Katrina. “The project embraces the power of intersectionalism and heightens the importance of the personal.”

Those who purchase the kits can either keep them as stand-alone works of art or create their own embroidery sampler by following the “sassy instructions” inside. Kits available for purchase include “Home Gun Sweet Home,” “Preggo Rewards Card,” and the timely “Abortion is Normal.” For your chance to “stab out stereotypes,” visit Katrina’s Stitch ‘n’ Bitch shop here.

“At the very least, creators get to legally stab something and release some pent up fury without harming anyone.” — Katrina Majkut