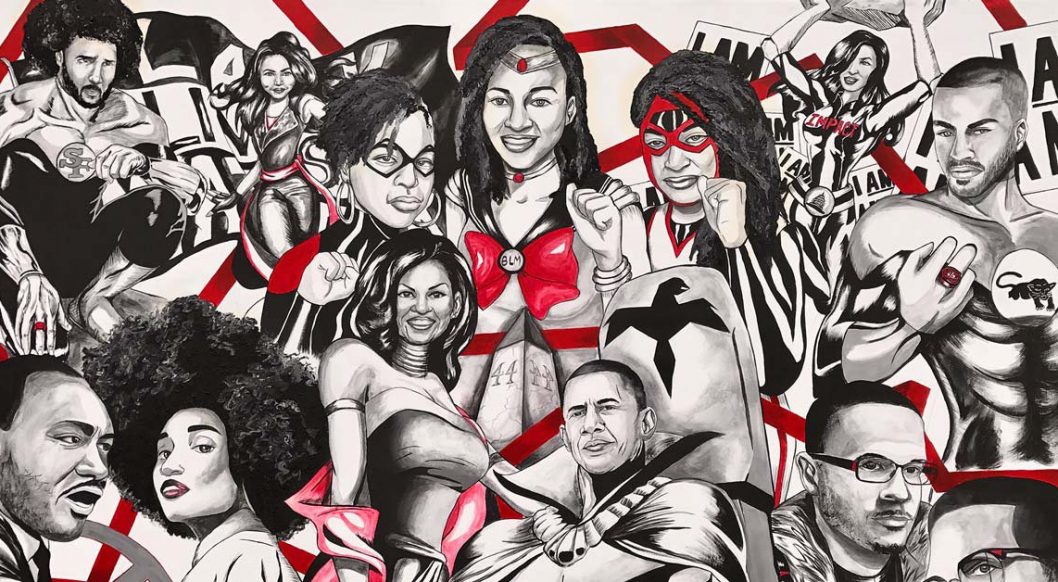 “As a Black woman in America, I am in a constant state of double consciousness,” says artist and educator Kenish Magwood. “Daily I feel every ion of being Black, female, and American.” Working under the moniker “That Art Nerd,” Kenish channels her love of comics and cartooning into biting social commentary. “The phrase that art nerd is the epitome for my artistic aesthetic,” she says. “[It] encompasses my love for the bold, the creative, the artsy, and the offbeat.”

To speak to her unique experience of being a Black woman in America—and the collective Black experience—the Charleston-based artist created Nigrescence Comics, a series of large-scale oil paintings that “debunk stereotypes, highlight civic and societal issues, and combat injustice and bigotry.”

“Branded” like Archie or Marvel Comics, each Nigrescence edition is marked with a volume number that corresponds to the number of years passed since slavery officially ended in the States on June 19, 1865. “I've always loved comics as a kid,” Kenish tells NOT REAL ART. “A good cover or all-around good art would draw me to a comic.” Saturated with symbolism, Nigrescence Comics packs a punch, despite its playful presentation. “Creating the work in comic book style, in my opinion, allows people to let their guard down enough to approach the works,” Kenish explains. “It isn't until you're surveying the work that the content becomes more apparent and by that time, you're engaged. In a way, I find it much easier to have difficult conversations when there is an air of lightheartedness and less intimidation.”

Kenish’s comic work is inspired by Dr. William E. Cross Jr.’s Nigrescence theory, which outlines the five developing stages of Black identity. According to Dr. Cross, “Nigrescence is a resocializing experience; it seeks to transform a pre-existing identity (a non-Afrocentric identity) into one that is Afrocentric.” Kenish remarks on her own experience with the theory: “When I first came across Dr. Cross's theory, I had the sudden realization that I had encountered each of these stages […] his work illustrated that there is no one particular way to be Black; however there can be stages of realizing what Black means to you. That was eye opening for me.”

The Nigrescence Comics series invites viewers to familiarize themselves with Dr. Cross’ theory, using it as fodder for productive conversation. Kenish comments, “The premise of my work is to ignite open conversation, understand the vantage point of others, understand an individual’s ‘stage,’ and prompt self-reflection for all.”

Your series of Nigrescence Comics pays homage to Dr. William E. Cross Jr.’s study on the five stages of Black Identity Theory—can you describe how his work has impacted you?

Kenish Magwood: His work allowed me to make sense of my journey. It allowed me to forgive myself for my naive stages, become more intentional in my current stage, and be gentle with others in whatever stage they may be in themselves.

What is the goal with your artwork? How will you know when you achieved it?

KM: I create artwork for the purpose of dialogue and understanding. The goal has always been to facilitate tough conversations and promote self-reflection. I know when my goal is achieved whenever people utilize my artwork as a learning tool and an aid to discuss social injustices, Blackness, acceptance, unity, equality and everything in between. The point is for the conversation to move past my technique and execution to the intent. The point thereafter is for the conversation to move to society and self.

What conversations do you wish to spark with your work?

KM: My aim is for my works to be an open-ended continuous dialogue, but I do paint with specific conversations in mind. For the Nigrescence series, I wish to spark a two-part conversation. For African Americans, one of those parts is: what stage are you in? For non-African Americans, the question is: what stage do you recognize/often see? The second question is for everyone: As a society, and as an individual, what has been my role in dismantling injustice or in perpetuating it?

KM: Ironically, my favorite comic is actually the Archie Comics series! My mom grew up reading them so I would read a lot of her old comics from the ‘70s. I had my own comic subscription for Archie all throughout middle and high school.

You refer to yourself as an “art nerd.” What would you like to share with other art nerds out there?

KM: Be you! Embrace the quirks and always recognize your unique way of thinking as a superpower.

Who do you look up to? Who are your mentors?

What do you wish you learned in school but weren’t taught?

KM: Art as a business! Everything from pricing artwork to networking typically goes untaught in school (even in art schools). You have to devote a lot of time to researching and figuring it out on your own. The arts are a fulfilling and viable career, so I just wish that that mentality, along with its tools, were taught in schools.

KM: I pray and worship a lot. My faith is very important to me. I've also been training myself to take mental health breaks and remind myself that "it's okay." Also, the things I do for my physical body like working out regularly and eating well help me in my mental state as well. The mind and body go hand in hand.

KM: I am currently working on a golden, regal themed series called The Harmonious Collection. The series depicts diversity in their own regal ways. The diversity ranges from ethnic to gender to size and age. It also redefines regal to be both traditional and non-traditional (modern) imagery. The name of the series is derived from the word "harmony" and is also a homage to my soon to be married name, "Harmon." This series kicks off a new era in life and in art.