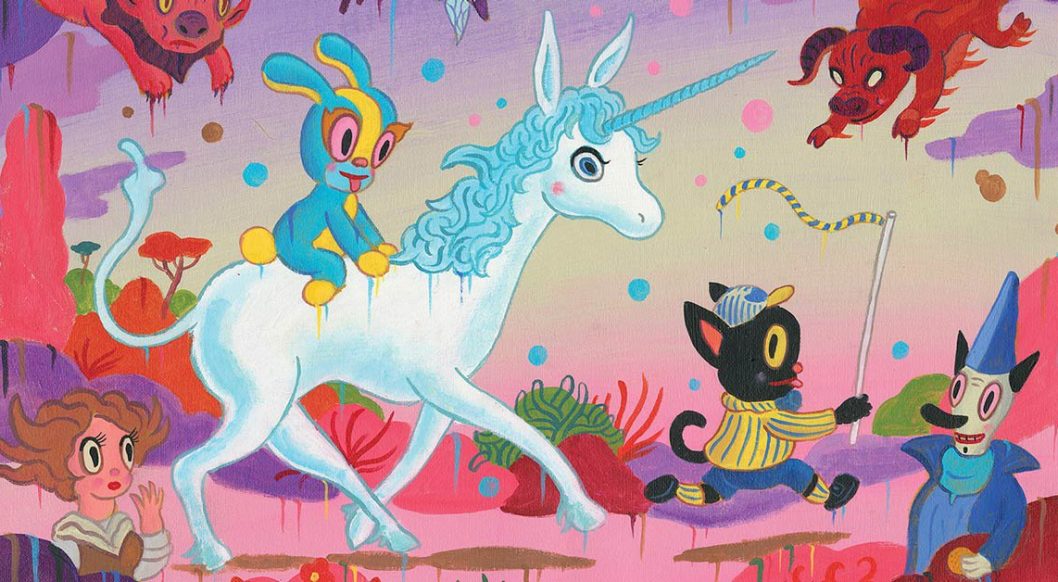 “It's a very rare person who is taken for what he truly is,” says Schmendrick, the bumbling but kind-hearted magician in cult classic film The Last Unicorn.

Based on the novel by Peter S. Beagle, the animated film is just as popular now as when it premiered 1982. In celebration of the film’s 40th anniversary, Corey Helford Gallery presents The Last Unicorn 40th Anniversary group show, which features new work inspired by the film from over 70 internationally renowned artists, never-before-seen original film production art (including hundreds of meticulously restored frames), and a pop-up shop.

The children’s film follows Amalthea, an immortal unicorn who discovers she’s the last of her kind. Almalthea’s quest to find others like her leads the unicorn from her protected forest into a world of danger, discovery, love, and regret. “It’s been 40 years since the movie came out and the unicorn’s journey still to this day captures the hearts and minds of fans all over the world,” the show curator, Caro Buermann, says. “It’s a story that’s still very relevant for me and resonates with so many people because the world in which the unicorn inhabits isn’t this pure, innocent fantasy…her world is very much a messy one, like our own, and I think a lot of people can take away from that in these uncertain times.”

Unlike anything else upon its release, the fantasy film took creative risks in a decade when safe sequels and box office numbers reigned king. The exhibition at Corey Helford is part of a two-year global celebration in honor of the film’s 40th anniversary, and is sponsored by the international animated film society ASIFA-Hollywood, a non-profit dedicated to cultivating and promoting the art, craft, and profession of animation.

Exhibiting artists include Hikari Shimoda, Kristen Liu-Wong, Messy Desk, and Travis Lampe, who have shown at Corey Helford in the past, but are presenting new work inspired by The Last Unicorn for the anniversary show.

“The world in which the unicorn inhabits isn’t this pure, innocent fantasy…her world is very much a messy one, like our own, and I think a lot of people can take away from that in these uncertain times.” — Caro Buermann, curator