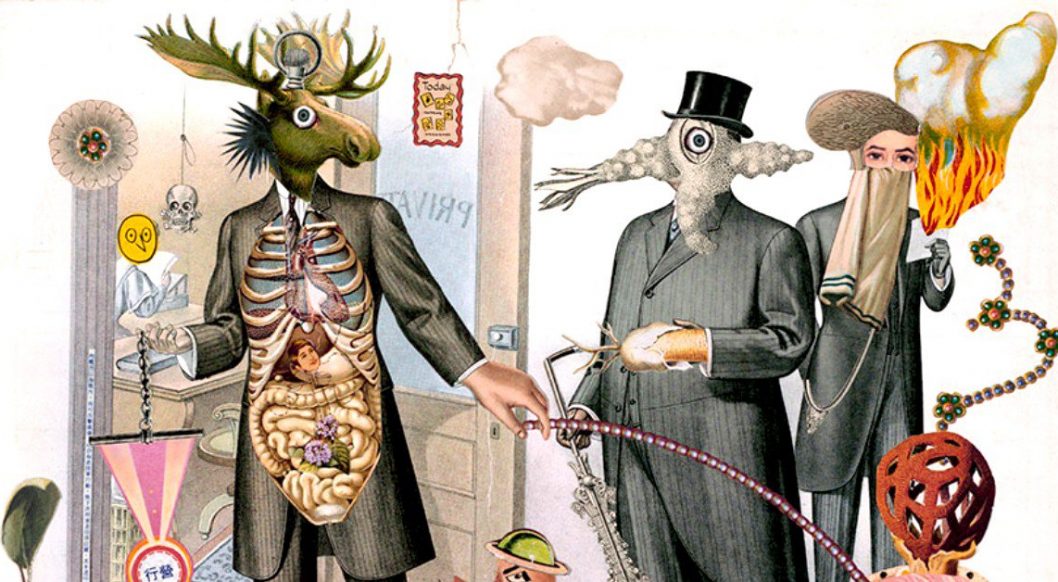 Rumor has it that Lou Beach was left in a playpen with a pile of newspapers and magazines as a child, and he ripped them into pieces, foreshadowing his career as an illustrator. After years of designing record covers and creating artwork for publications, the self-taught Los Angeles artist enjoys making art for himself. Likening his approach to assembling jigsaw puzzles without a reference image in the dark, Beach relies on the subconscious mind and acts of chance to dictate his arrangements of visual detritus.

Beach was born in Germany to Polish parents displaced by World War II. He moved with his family to Rochester, New York and grew up in a working-class neighborhood. He drove a truck, moved furniture, and put up sheet rock. Viewing Surrealist images in museums and books inspired him to become a commercial illustrator. The ephemerality of designing for magazines appealed to him, and he found it gratifying to have his work on record covers.

In 2009, encouraged by his artist children, Beach had a near sold-out show of his record cover designs in a Los Angeles gallery, followed by exhibitions up and down the West Coast, and in New York. He became adept at using social media to extend his range of viewers. He hopes to live long enough to enjoy a retrospective or perhaps find new approaches to art.

Print is dead, the music business is less interested in physical product than in streaming. However, I find social media has brought my work to more people than could ever fit in a gallery. I have been able to present my work to a large audience and even sell to a few viewers…..Many of the young people I've encountered on these occasions are hungry to hear about my experiences in both the commercial and fine art worlds, but also about my life and how it has affected my perceptions and attitudes as reflected in my work. I have always counseled students to get some experience outside the art realm, to work a job, to meet ordinary people and see what life is like for those not as privileged.

Beach is represented by galleries in Los Angeles, San Francisco, and Seattle. To him, collage work involves being able to see connections and patterns that others might not be aware of. He considers it ‘the artist's job to present these visions to the world, and expose the underlying beauty and terror, and horror and grace that exist all around us.’

My practice involves allowing the subconscious, chance, and randomness to intersect with mythology, politics, fairy tales, and comics to produce something new and distinct. My raw materials are detritus, old books, scraps, trash, and ephemera. At a certain point the randomness and chance cohere to form an idea of what the piece is about. I follow their lead and begin a journey of exploration, not knowing from the onset where it will lead. This is part of the magic of not allowing myself to be constrained by a preconceived notion. I find making a collage akin to putting together a jigsaw puzzle without the accompanying reference picture. In the dark.

I am an old man now, 74 years old. Family lore has it that as a toddler, I was left in my playpen with piles of newspapers and magazines which I tore into pieces; print media as babysitter. That seems to have been the beginning of my career as a collage artist.

I am self taught, learning from looking and practicing, cutting and pasting, and yes, tearing. For many years I worked as an illustrator, making art for record covers and magazines – always someone else's needs to be met, problems to be solved. Once I returned to making art for myself, creating and solving my own problems, I felt the freedom of expression blossoming again. I grew up in a working class ethnic neighborhood. My parents worked in factories and I did too as an adult, along with putting up sheet rock, driving a truck, working in a machine shop, and other unskilled jobs. Discovering art in books and museums and galleries awakened an ambition to become an artist. Art became my job.

Lou on the Web And Social Media

Here is where to find out more about Lou Beach on the web and social media: