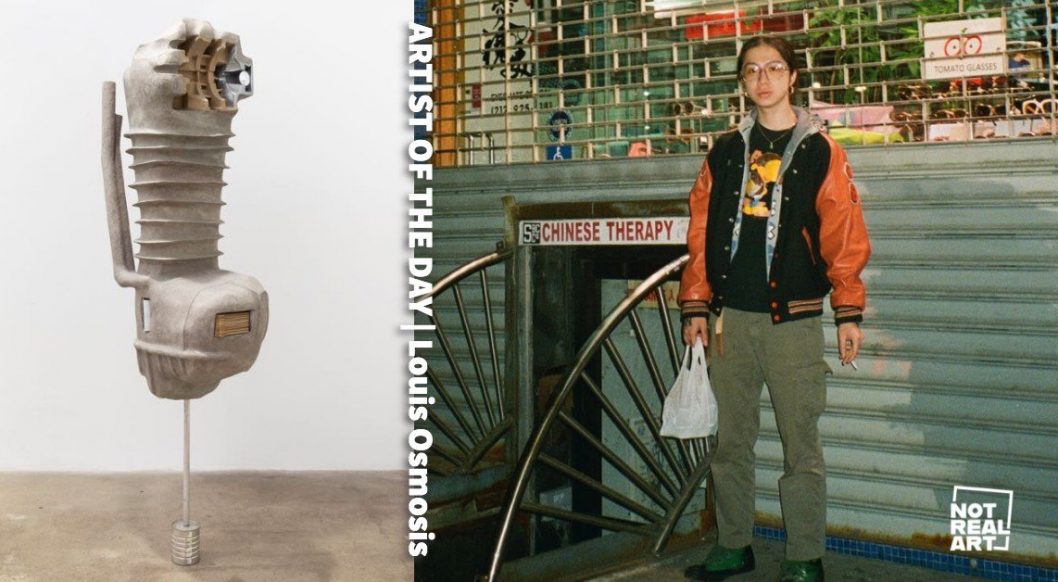 Louis Chan, a.k.a. Louis Osmosis, describes his conceptual approach as an 'investigation into modes of non-success.’ He combines sculpture, drawing, performance, and video in his explorations of ‘post-democratic’ life. In 2018, Osmosis received a BFA from the Cooper Union for the Advancement of Science & Art in New York. His eclectic constructions incorporate an array of vernacular materials, from popsicle sticks to toilet paper tubes, coffee cans, hornets' nests, and slices of bread, to make a probing statement about the ways in which the world has devolved since then.

Like other artists who graduated from art school before the pandemic and were thrown into isolation, Osmosis observed the chaotic events unfolding on the global stage and responded to the turmoil in his work. His multi-disciplinary creations meander between fatigue and aspiration, pessimism and hope.

Contemporary life is dictated by a post-democracy, bringing with it the proverbial smoke & mirrors accosted by the trappings of identity politics; aspiration now registers as a forecast of dilemma. Thusly, at the core of my work is an investigation of modes of non-success, where ends are blurred and trajectory is volatile. Democracy has thoroughly failed to deliver its promises and for all intents and purposes has died. But perhaps its death is a threshold to paths anew, its wound an entry point–how does democracy work in its afterlife?

Osmosis’s 3-dimensional constructions have a subtle elegance that belies their Arte Povera roots. A standing cedar figure (Pupil, 2019) carved from the remains of ‘House of Suicide’ by the late architect John Hejduk (a memorial to a Czech dissident reconstructed on the Cooper Union campus in 2017), topped with a magnifying glass, is wryly introspective. A no less intriguing piece, (Engine, 2020), constructed from papier mâche and a range of detritus, has the willful irreverence of a Dubuffet. Despite his take on the challenges of contemporary life, Osmosis infuses postmodern bleakness with cautious optimism, suggesting that solace can be found in the act of creation.

I’ve been considering conventions of world-building (in-real-life and otherwise) as a means of discerning a crude sort of positionality–one born of non-linearity, disorientation, and rupture. By conflating divergent references, materials, and forms I aim to delineate atypical spatial/temporal/perceptive circumstances and the physics of a conceptual descent without being beholden to any one idea of place.

At the core of this is a formal and aesthetic exploration of ambivalence and anxiety insofar as these affective modes bear witness to certain historical contingencies, yet also attest to a latent plausibility initiated in despondence and pessimism. Rather than traverse actual distances, the anxious subject tends to wander, to drift. This is a meander born not from idleness but of withdrawal and abandonment, tactics that defy the undertaking of an aspirational horizon. Amidst promises of futures-never-arrived and false projections of the past, this sort of trajectory disavows enterprise and (in its suspension of ends) points to the plausibility afforded to absurdity, disorientation, and irreverence.

Contemporary conditions of fatigue and aspiration have elucidated that not only is the horizon nothing more than lateral projection, but that it was never truly an asset to begin with. I look to the meander, the plunge, the collapse as methodologies of making to echo a counter-politics wherefrom the stuff of pessimism and speculation can thrive to forge positionality anew.

Louis Osmosis (b. 1996, Brooklyn, NY) is an interdisciplinary artist working primarily in sculpture, drawing, performance, and video. He received his BFA in 2018 from the Cooper Union for the Advancement of Science & Art. Recent exhibitions include a twoperson show, This is your captain speaking, with Thomas Blair at Gymnasium, New York (2020), a three-person show, Free Fall, at Shoot the Lobster, Los Angeles (2021), and a group exhibition, The Symbolists: Les Fleurs Du Mal, at Hesse Flatow, New York (2021). He lives and works in Brooklyn, NY.

Louis on the Web And Social Media

Here is where to find out more about Louis Chan on the web and social media: