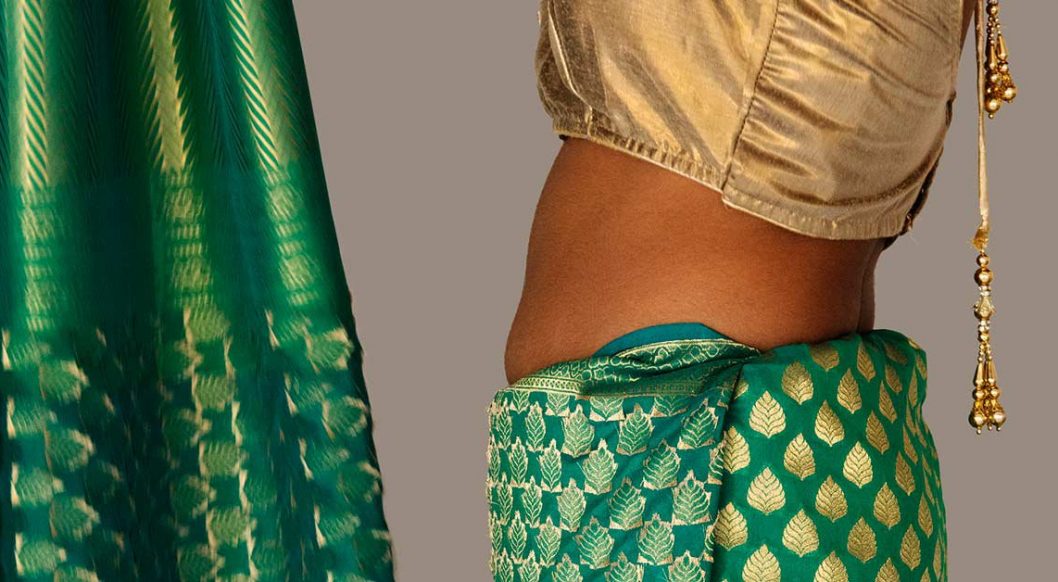 Photographer Madeleine Blake Captures the ‘Dance of Dressing in India’

“Perched high on the seat of a pedal rickshaw, feeling like a queen of the night, I am headed home in the dark from a wonderful photo shoot,” Madeleine Blake writes in her blog from a transformational artist residency at Kriti Art Gallery in Varanasi, India.

The Oregon-based photographer recently spent two consecutive Februaries with the gallery exploring the intricacies of Indian clothing and culture. “It started simply enough,” she admits. “A fascination with and love of the colors and patterns of traditional clothing as seen on the streets of India.” The resulting body of work, Without Stitches, eventually morphed into traveling exhibition Of Fabric and Flow: The Dance of Dressing in India, which opened at Oregon’s Favell Museum in May 2022.

The original title—Without Stitches—refers to a curious fact about traditional Indian clothing, one Madeleine discovered with help from her camera’s keen eye. “How do Indian people, many of whom are riding bicycles or motorcycles, working hard at manual labor or carrying children, manage to keep on their clothing?” she pondered, noting the lack of fasteners sewn into the vibrant fabrics. Using her camera to investigate, Madeleine photographed four basic garments on willing participants: “The sari, which most women still wear and which provides India with unforgettable color; the dhoti, a skirt-like garment worn by men; the langot, sometimes used as underwear, but also the official attire of wrestlers; and the pagadi, a head wrap,” she writes in her artist statement.

As Madeleine searched for Western-style fasteners in the folds of her models’ seamless clothing, she soon uncovered the answer to her original question. “As Hindu tradition would have it, prior to the British invasion, any piece of fabric pierced by a needle (or anything) was considered impure, and thus unwearable,” Madeleine explains. “Now, of course, fabric is pierced all the time: embellishments are sewn on, petticoats have seams, even safety pins are used to secure the modesty of the attire. However, a sari is still raw yardage, as are dhotis, and pagadis: no buttons, no zippers, no hooks.”

Mesmerized by the simple act of getting dressed, Madeleine transforms an everyday occurrence into an elegant dance. “No matter the attire, it is the grace that continues to awe me,” she says. “Not only are the fabrics with their drape and color beautiful, there is a careful choreography involved in simply putting on clothing.”

“There is a careful choreography involved in simply putting on clothing.” — Madeleine Blake