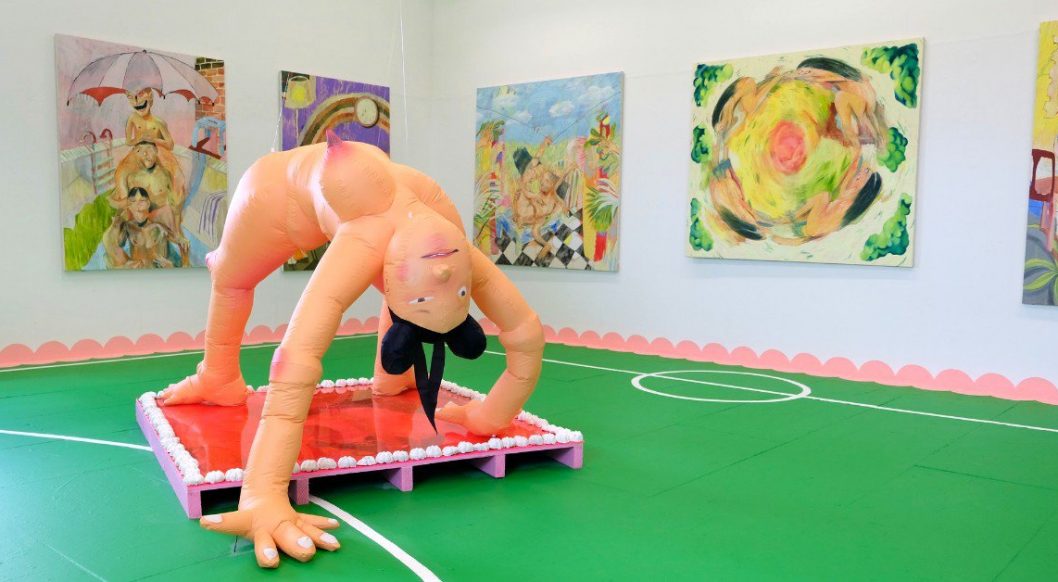 It’s hard not to giggle at Alya Hatta’s blobby, inflatable nudes, which bend at illogical angles and pucker at the seams. One such nude—titled “Sleaze Cake”—lives at the center of Hatta’s graduation exhibition, Always Greener, a rollicking spectacle made laughable by the backbending blowup doll posed on a kelly green basketball court. On the court’s walls, Hatta’s colorful paintings hang out of bounds, but there are no B-team benchwarmers in sight.

Hatta, who was born in Malaysia and is now based in Kuala Lumpur and London, explores her diasporic experience as a Southeast Asian woman who moved around constantly as a child. Hatta’s mercurial childhood led to a fascination with play, a central theme of Always Greener. “I was initially thinking about […] inflatable castles and bouncy castles [from] when we’re younger, but over time, how the idea of play morphs into sexual stuff,” Hatta tells Plural Art Mag. “It just reminded me of the number of times I’ve been fetishized as an Asian woman.”

Hatta’s figures are fleshy and exaggerated—some body parts surrender to gravity while others defy it. The arms are spindly, the joints are soft and swollen. Both choices are intentional. “I wanted (the sculpture) to look like what I felt like,” says Hatta, who has struggled with body dysmorphia from a young age. “I was clear that there needed to be a back roll, and that the ass had to be falling down, and that the titties were like this,” she continues. Playfully posed, the bodies in Hatta’s work teeter on the edge of puberty, either unaware of their lewd mannerisms— finger in your Jello, anyone?—or unashamed. In further investigation of the relationship between sex and play, Hatta has added a second inflatable figure to the mix with her most recent work, “Chub Rub.”

Ultimately, Always Greener encourages us to lighten up a little—things are just fine on your side of the fence, Hatta seems to say. “I paint people in the way that I do because people should just look however they want,” she explains, before adding: “Let me have all the lumps and bumps.”