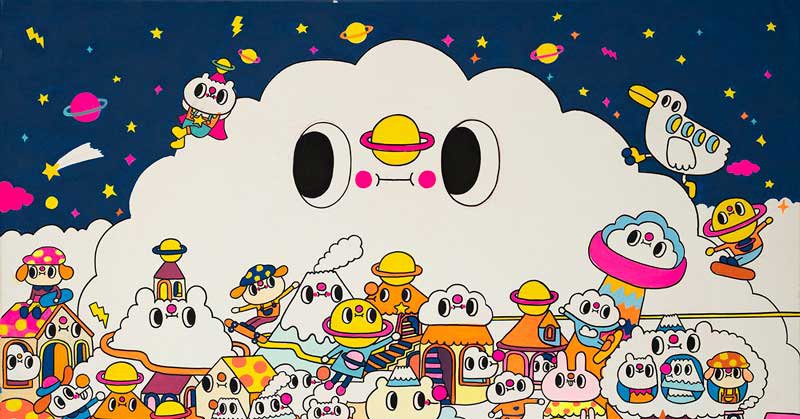 “When I daydream, I look into the blue sky or the starry night,” says Hong Kong-based artist Messy Desk, aka Jane Lee. This month the internationally acclaimed painter debuts Messy Desk in the Cloudy Wonderland, her second solo exhibition at Corey Helford Gallery in downtown Los Angeles.

Populated by dimpled clouds, apple-cheeked critters, and fleecy castles in the sky, Messy Desk’s Wonderland is a joyful romp through the artist’s wildest dreams. “This series of paintings is an inspiration of daydreaming,” she says, describing her vision of a downy playground in the clouds. Borrowing from MC Escher’s topsy-turvy staircases, Messy Desk packs every nook and cranny with pillow-soft characters wearing planetary rings, hot pink capes, and spotted mushroom hats. Carefully crafted stroke by stroke, her explosively colorful work hides a treasure trove of saturnalian playmates. “My friends are playing hide and seek,” says Messy Desk of her work in Wonderland. “Their little adventures are recorded in my paintings.”

After three years of social unrest, political strife, and worldwide lockdown, Messy Desk’s bright acrylic paintings are a breath of fresh, cool air. With characters like Cloudy Bear and Mr. Fuji, her work in Wonderland whisks viewers into a giddy fantasy among puffy cumulus clouds. Messy Desk shares her thoughts on the escapism in her new work: “I wish everyone can feel the same sense of freedom from my artwork and be relieved from the stress of real life.”

“My friends are playing hide and seek. Their little adventures are recorded in my paintings.” — Messy Desk, aka Jane Lee

Start Your Art Collection With Affordable Works From These Contemporary Artists
Collage Artist Elliott Hundley Embraces Excess and Chaos
‘What Game Would You Play With This Toy?’ Shocking Designs From Nathaniel Lewis Comment on a Culture of Violence
Announcing First Friday Exhibitions: A Curated Series From NOT REAL ART
Christine Garvey Redefines Motherhood as Messy, Monstrous and Tenderhearted