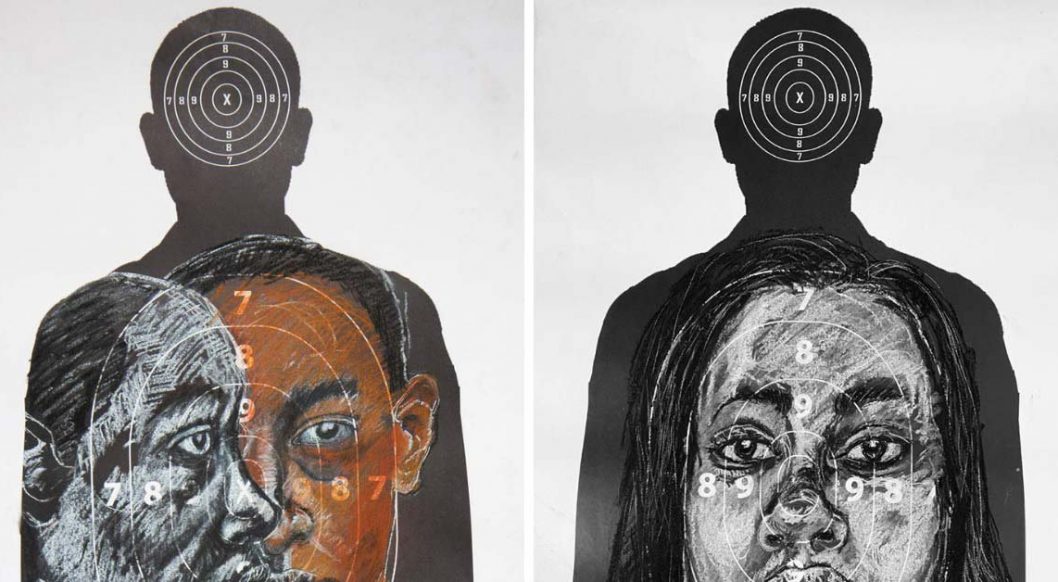 Neil Kendricks is an artist, filmmaker, writer, and photographer who teaches at San Diego State University (SDSU). His interdisciplinary practice addresses the human toll of racial violence. In 2020, Kendricks launched a series of mixed-media drawings titled Strange Fruit, which place the viewer in the psychological space of marginalized individuals viewed as “other,” and create a “pseudo shooting gallery of paper ghosts haunting an exhibition space.”

Neil has a master’s degree in television, film and new media from SDSU. His short films have been screened at festivals in Sweden, London, Serbia, Havana, and Cannes. He produced, designed, and storyboarded Jordan Crandall’s video installation Heatseeking, which was exhibited at the Whitney. His recent exhibition at the Oceanside Museum of Art, Temple of Story, combines a lifelong love of drawing with his affinity for fiction writing. Neil is currently developing Strange Fruit into a screenplay drawn from personal episodes of being profiled by the police.

“My Strange Fruit drawing series marks a new chapter in my evolving art- and filmmaking practice,” he tells NOT REAL ART. “Pulling from my personal experiences with racial profiling by police officers, I began writing my screenplay-in-progress, also titled Strange Fruit, about a small town rocked by the fallout of a hate crime before the murder of George Floyd triggered America’s reckoning with race and racism. In this context, my multifaceted Strange Fruit project, which includes drawings and a screenplay-in progress, cauterizes the wound that refuses to heal as we seek the cure for our nation’s oldest pandemic—racism.”

Neil’s commitment to social justice and willingness to go to difficult places reflect an ongoing mission to “investigate catastrophic social ills such as white supremacy and its deeper roots in American life.” His ability to confront the experience of otherness from multiple perspectives and diverse platforms illustrates the range and depth of his creative practice.

“My multifaceted Strange Fruit project […] cauterizes the wound that refuses to heal as we seek the cure for our nation’s oldest pandemic—racism.” — Neil Kendricks

Our Artist of the Day series is a regular feature highlighting artworks from the 100s of grant applications we receive. The NOT REAL ART grant is an annual award designed to empower the careers of contemporary artists. Find out more about our grant program here.

How Texas Painter Carlos Donjuan Overcame the Fear of Not Belonging
Justin Tate Creates Site-Specific Installations Around the Globe
How Ates Isildak Creates a Safe Space for Marginalized Communities
Spandita Malik’s Embroidered Photographs Turn Away From the Colonized Eye
Sculptor Jess Self Becomes the Lover, Mother, and Martyr of Her Own Story