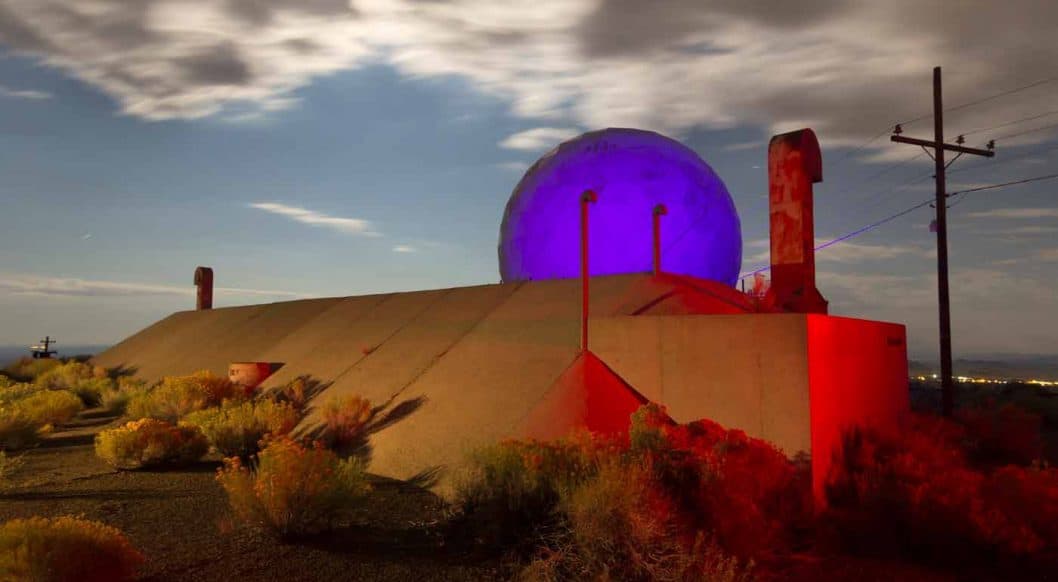 Long before photographer Troy Paiva visited the once-booming ghost town of Bodie, CA, perched high in dusty hills just east of the Sierra Nevada mountains, another artist penned his own iconic meditation on human fragility. Though Paiva, a seasoned fence-hopper at this point in his life, might not seem like an obvious counterpart to English romantic poet Percy Bysshe Shelley, the two share a fascination with time’s ruinous force on human arrogance.

Shelley wrote his now-famous sonnet “Ozymandias” in 1817 in response to Napoleon’s 1798 conquest of Egypt, where archaeological discoveries from the country’s pharaonic empire gave Europeans something to gossip about. In the poem, a “traveler from an antique land” describes “two vast and trunkless legs of stone” in the middle of the desert. The legs belong to Ozymandias—the Greek name for Rameses II—who cemented his legacy as a powerful ruler during ancient Egypt’s golden age. Shelley’s poem points out that time renders fame hollow, no matter how celebrated or far-reaching. All that’s left of Ozymandias’ empire is a “colossal wreck” surrounded by vast stretches of “lone and level sands.”

In a different desert, halfway around the world, a vacationing 12-year-old Paiva stumbled across his own Ozymandias. Bodie was once a gold-mining town, prosperous in the 19th century, but now exists in a state of arrested decay. The young artist’s family vacation became the catalyst for his interest in documenting the decline of the American West, though it wouldn’t manifest until he turned 29: “I bought my first 35mm camera and hit the road, specifically to photograph the forgotten roadsides of my youth at night,” notes Paiva. “Back then I didn't know an f/stop from a bus stop, but I just got to work.”

Paiva shoots under cover of darkness, which gives his work an illicit feel. The photographer treats his discoveries like staged cinematic scenes, borrowing from surrealist filmmakers Brian de Palma and David Lynch to create an eerie vision of modern America. His exposure times are long—anywhere between two and 10 minutes—which lets the artist play with colored light. Seedy hotels, abandoned hospitals, and decommissioned military bases beckon with a lurid, come-hither glow. In Paiva’s exploration of a post-Wild West, we experience the gradual downfall of the American empire, but with a perverse aesthetic pleasure the artist knowingly cultivates. All empires return to dust, Paiva reminds us, but we can still enjoy the ride down with gleeful curiosity.

Troy Paiva discusses man’s insignificance in the world, discovering artistic influences across multiple mediums, and the best music for road-tripping across the desert at night.

Troy Paiva: Misrach? Robert Frank? Walker Evans? I dunno, there's so many. That's just for photographers—I don't think you can say one book for "artist." Most of my art book collection has nothing to do with photography! When it comes to art books, the more the better.

TP: Robin Williams? Hunter Thompson? Frank Zappa? There's a LOT, but beware meeting people you admire. It seldom turns out like you want.

TP: Man's tiny place in the universe. We think we're such hot shit, but we're not. Ozymandias, baby!

TP: A lot of my aesthetic is drawn from movies because every shot in every movie is lit in some way. Storraro, Lynch, DePalma, countless others, all big users of complex lighting around the time I started doing this. But even cheesy TV cop shows, too. And horror novels . . . and comic books . . . and rock concert lighting . . . because I also paint, draw, write, sculpt, design, and make music, I draw influences from all those fields, and they all cross-pollinate: Drawers influence writers who influence architects who influence musicians who influence photographers. If it's just ONE person, let alone just ONE medium influencing your art, you're not doing it right.

TP: No guilt, but I'm used to taking heat from people about my love for '70s prog rock: Yes, Genesis, Camel, stuff like that. All my punk rock/metal friends just laugh at me about it, but it's great for long late-night drives across Nevada. So big, so dramatic, so colorful!

TP: How influential my work has become. When you add it up, the number of people that have seen my work since putting it online back in 1999 is absolutely staggering. Even if they don't know my name, they've seen the work. Or they've seen similar images from the countless people that were influenced by what I was doing. Hand-lit, long exposure night photography in abandoned sites is everywhere now, but you'd be hard pressed to find much done before 1989, when I started.

TP: I had a long career as a product and graphic designer, illustrator, painting instructor. Shot, wrote and published five books . . . yet I have almost no formal training. You either have the skills, or you don't. When I felt lacking in technique, I would take a class: 3D modeling, Photoshop . . . specifically to learn new skills in then-new areas of the art market. Yes, this is a very 20th century mentality, but it was fairly common to have a long, full career without a degree back then. Today, it seems like corporate employers of artists won't even look at you without a fancy degree. If I was trying to get established today, I don't think they'd even let me in the door.

TP: I'd go back in time and beg Marcel DuChamp not to show the “Fountain," because it sent the fine art world down a 100-year blind alley of "concept over content." The fountain was meant as a joke. He was saying: "Look, I can even make a urinal into art because, I, The Artist, simply have to sign it and say, ‘It is Art!" But the establishment took it seriously and suddenly ANYTHING became art. It gave rise to a 20th century filled with blank white canvases and other bogus trash passing as masterpieces. Played out to its conclusion, the concept doesn't work: If anything can be art, then nothing is really art. I know, it’s a funny statement from a guy that literally photographs junk and calls it art, but the difference is in how my lighting and staging changes the context of the subjects. The fountain was just a urinal.

TP: I was commercially successful when I was a toy designer at Galoob. I was paid good money to draw cars and car wash play sets, influencing a whole generation of kids to like cars. It was a compromise though, always working within strict guidelines and parameters. Posthumous fame is conceptually pleasing, but won't be doing me any good paying the bills this month. Just ask Vivian Maier, she never looked like she was having any fun.

TP: I took a fall in a junkyard on a shoot in the summer of 2019 that required surgery and six months of rehab, so I was pretty much out of commission and housebound for the six months before the pandemic even hit. Those back-to-back events have kept me off the road and unable to night shoot for going on two years now. During this "off" period, I wrote and released my most recent two books and did a whole pile of paintings.

TP: I'm looking forward to getting out for some fresh shooting, any second now . . . and am on deck to co-host a photo workshop in October. But I always wonder if THIS will be the year I lose interest in doing more, and just concentrate on doing things with the overwhelmingly large body of work I've already amassed. As I get closer to retirement age, the thought of driving 2000 miles in a weekend to stay up all night rolling around in broken glass, only to be chased by skunks and bats, seems to hold less appeal. The part of me that just wants to stay home and paint gets bigger every year.