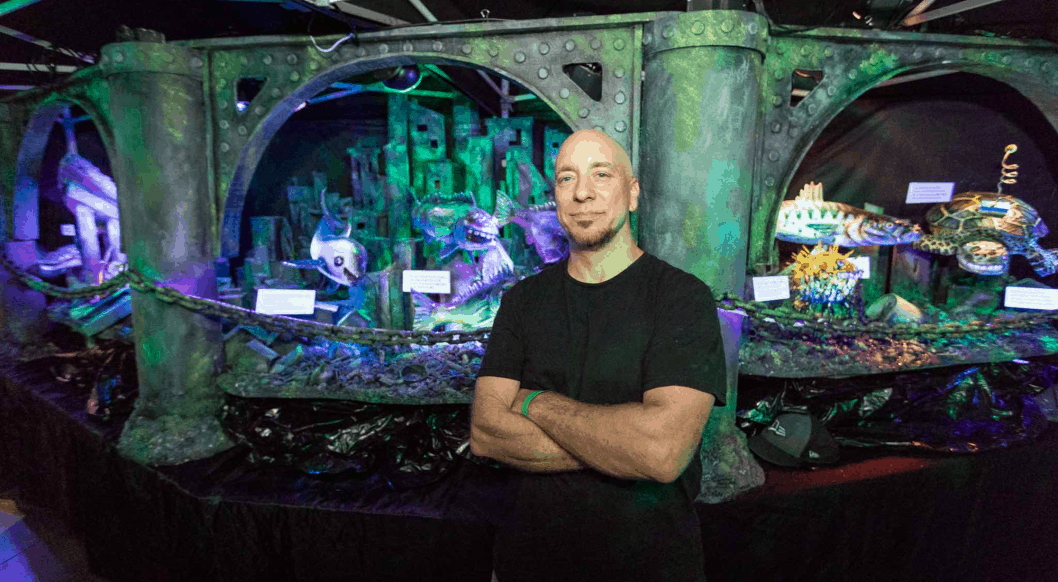 Bill Kieffer is one of those artists too talented to put in a box. A multi-discplinary, multi-dimensional, multi-media creative, Bill writes, designs, paints, draws, sculpts, fabricates and tattoos professionally. He’s exhibited his artwork in art galleries, created commercial work for global brands, produced stop motion animation in Hollywood and he’s tattooed hundreds of proud clients' bodies with his art.

Bill also happens to have a great sense of humor and passion for environmental sustainability and aquatic life.

When he started developing his concept for “City of Fish" we quickly became fans its clever vision and important message of conservation.

City of Fish is an immersive, walk-through art installation weaving a whimsical narrative about the sunken coastal cities of our future, and the underwater creatures that make it their home.

Kieffer has risen to prominence creating cartoonish but realistically rendered sculptures of fish and other animals, made entirely out trash and found objects he picked up from the beach. Unbeknownst to admirers, these creatures have all been part of a larger narrative.

“There are two things that have been a huge part of my life for as long as I can remember: Making art and being underwater. And one constant that has been present in both of these is trash,” says Kieffer. “There's always been plenty of garbage to pick up whenever I've gone diving, and it just seemed natural to incorporate what I collected into my sculpture. Since my art has progressively been focused on interpretation of the animal world, the repurposing of human-generated garbage into the piece has become essential for the underlying purpose and message throughout the work.”

Looking for the right opportunity to collaborate with Bill, we recently agreed to syndicate his City of Fish comic illustrations here at NOT REAL ART.

Starting April 1, we'll publish Bill Kieffer's City of Fish comics featuring his great sense of humor and vital message as told by his charming, down-on-their-luck fish living in a city under the sea, in a world ruined by us — f'ing human beings.