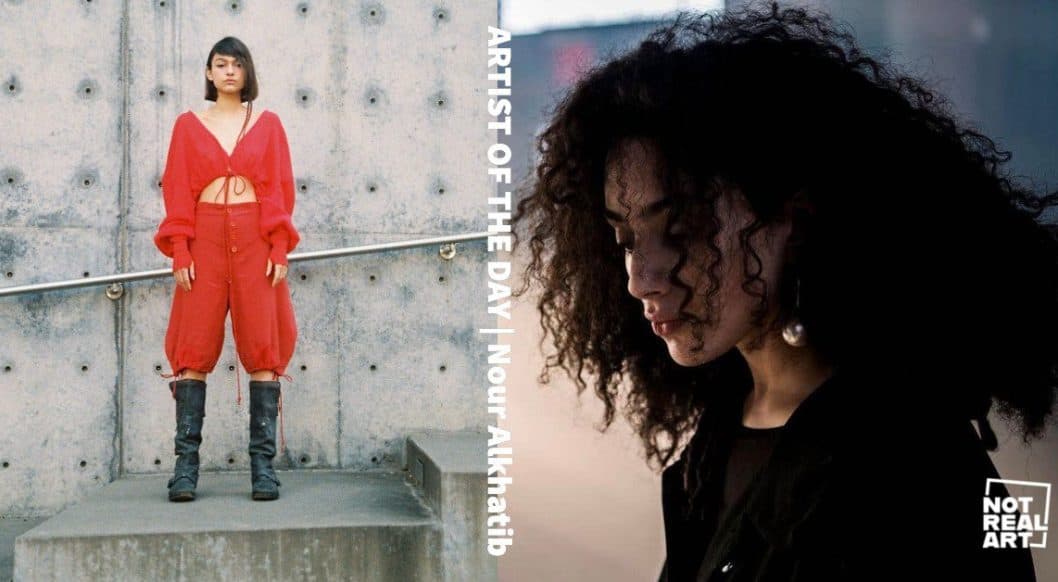 Designer Nour Alkhatib, who spent part of her childhood in Jordan, has created the collection AL-HIMAYAH, which means 'protection’ in Arabic. Using natural fibers and exaggerated silhouettes, she creates garments that make women feel "protected and confident within."

Fashion might not be the first medium that comes to mind when making a feminist statement, but Nour Alkhatib is determined to change that. Focusing on women like herself, who’ve faced “unique barriers in pursuit of social and political equality,” she designs garments that challenge traditional notions of femininity. She considers the process of design a “personal catharsis.”

Growing up in the U.S. and the Middle East has influenced her work and given it a distinctive layered effect. Alkhatib also finds inspiration in Japanese culture and philosophy and hopes to study there someday. She views fashion as a platform that allows her to “give shape to what she thinks and feels” and creates exquisitely crafted clothes that encourage others to do the same. Her exaggerated forms are meant to empower.

One of the obstacles Alkhatib has faced in her creative journey, is the perception that fashion isn’t a traditional art form. Undaunted by outside opinion, she has created a unique design niche that blends the centuries-old craft of sewing with sculptural and conceptual elements. Her willingness to take fashion in her own direction exudes the confidence of a 21st-century artist with diverse roots, and is an acute reminder of the fluidity of contemporary art.

In my collection “AL-HIMAYAH” which means protection in Arabic, I've created works stemming from my past, growing up as a woman in America and the Middle East. I like to approach my work in a nontraditional and free-flowing way often using natural fibers and exaggerated silhouettes. My experiences significantly influenced my work, I believe that you should give shape to what you think and feel. I also take inspiration from Japanese culture and Japanese philosophy. I associate words like “armor” and “protection “when it comes to my garments, which is why I decided to name this collection "AL-HIMAYAH".

As a woman I felt that at times I was put in impossible situations with many restrictions. I feel like I had to become a warrior because of it. Therefore it is important to feel safe and strong in the garments I create, similar to how a warrior going in the battle feels. A Woman’s image constantly being distorted by society, I believe in creating garments that make one feel protected and confident within. Allowing us the ability to distort our own image of who we are and who we desire to become. The exaggeration of shapes and size within my garments is my way of distorting my own image and my own personal catharsis.

Nour Alkhatib was born and raised in Fort Worth, Texas. She moved to the Middle East (Jordan) at the age of seven, where she lived for four years. Alkhatib moved back to America in 2008 and has continued her education ever since. Alkhatib remembers having an interest in clothing since she was a child. She had always known she would end up doing something in the creative field, not knowing what it was exactly.

In 2015, Alkhatib met someone who impacted her life and persuaded her to study clothing design. The following year she began freelancing as a stylist. That activity ultimately led to Alkhatib designing her own garments and fashion pieces when she could not find appropriate items for a shoot. At the time, she lacked a basic understanding of sewing or putting a garment together, but it was hard to find garments she liked, so Alkhatib wanted to learn how to create her own. The following year she went to school for fashion design where she learned skills such as sewing, pattern-making, and draping. The process of clothing is Alkhatib’s personal catharsis, allowing her to release emotions and experiences and bring them to life in the 3D/2D form.

Nour Alkhatib – On the Web And Social Media

Here’s where to find out more about Nour Alkhatib on the web and social media: