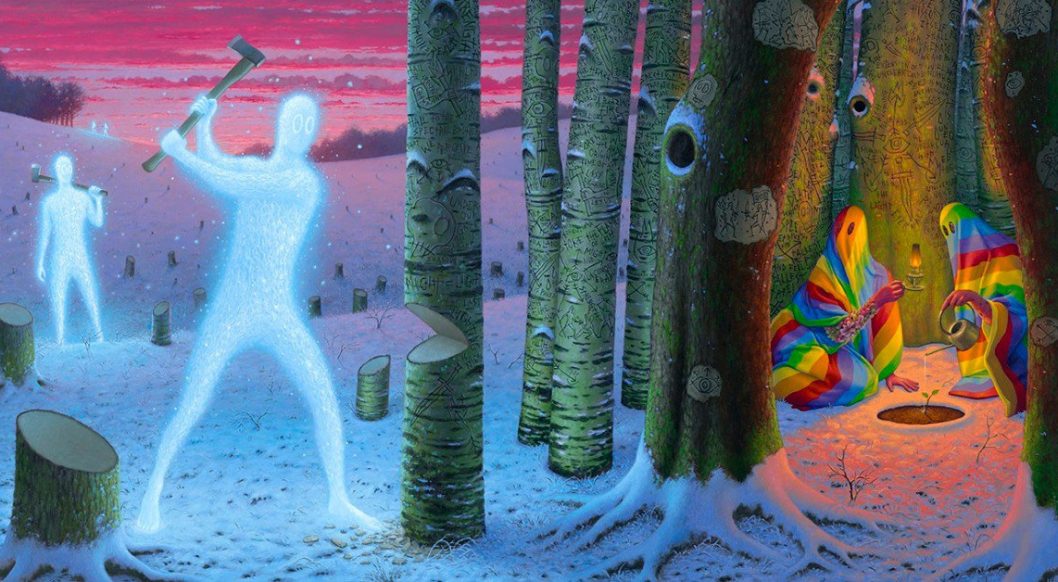 “Myth is the foundation of life; it is the timeless pattern, the religious formula to which life shapes itself,” wrote 19th-century German novelist Thomas Mann, who believed Nazism had deep mythological roots in his nation’s psyche—an unpopular belief even in 1950.

Like Mann, LA-based painter Adrian Cox questions the foundations of modern myth. His narrative-based work tells a sweeping tale worthy of Tolkein, revealed over the course of several elaborate series. Dream Country, Cox’s latest body of work, broadens the fantastic story at the heart of his work: “My paintings chronicle the lives of the Border Creatures, a group of hybrid beings that live in the verdant wilderness of the Borderlands,” Cox explains. “The Border Creatures exist in symbiotic harmony with the natural world, but are antagonized by the Specters, spirits of pure energy that casually burn the landscape that they walk upon.”

To live in the borderlands, as poet Gloria Anzaldua would say, implies you’re “caught in the crossfire between camps.” Though his work is pure fantasy, Cox deftly draws parallels between the persecuted peoples who appear in Dream Country and those caught in the crossfire of modern myth-making. Cox, who grew up in the Deep South with closeted queer parents, is especially sensitive toward harmful myths surrounding the LGBTQ+ community.

“My parents are about as far from traditionally Southern as it gets,” he says in an interview with Voyage LA. “There was a good bit of social camouflaging that we did to blend into the community there. One of my mothers is transgender, and my parents decided that we would have to live closeted for the sake of safety and job security,” he continues. “We cooked up a false family history to convince people that my parents were totally heteronormative.”

Elsewhere, Cox connects myth-making directly to violence. In Dream Country, he explains, violent rituals codify prejudice and contempt into practice: “The Specters use the forests of the Borderlands to create an archive of apocalyptic prophecies and angry rantings,” he says. “They transform the landscape into a reflection of their collective will, heedless of any harm done in the process […] these desecrated forests are harvested and burned in a climactic ritual intended to reshape reality.”

”Reshaping reality,” as Cox puts it, is standard practice in fascism’s playbook. In the early 1930s, as the Nazi regime rose to power, Thomas Mann suspected the party’s nationalist “storytelling” was to blame for their popularity. The best-selling author eventually became one of Germany’s most vocal anti-Nazis, convinced the party’s aggrandizing lies about legacy and bloodlines were fundamentally anti-democratic. Cox’s work seems to nod slyly in this direction, suggesting strict adherence to toxic myths can result in fascist rhetoric and real-world brutality.

Cox, however, sees myth-making as vital to the human experience—it’s how those myths are wielded that matters. “[Myths are] something that can build a sense of community, of purpose, and of collective identity,” he explains. In Cox’s work for example, “the Border Creatures use their own rituals to cultivate and heal the Borderlands” after the Specters burn everything in sight. In life, these healing rituals, however small or hidden, return a sense of self to those individuals or communities denied rights and protection. Though Cox believes in the restorative power of storytelling, his work suggests the line between hateful rhetoric and radical acceptance may be thinner than we’d like to believe: “I think one of the paradoxes at the heart of my work is an attempt to reconcile the danger of myth-making with the fundamental human need to mythologize the world around us.”