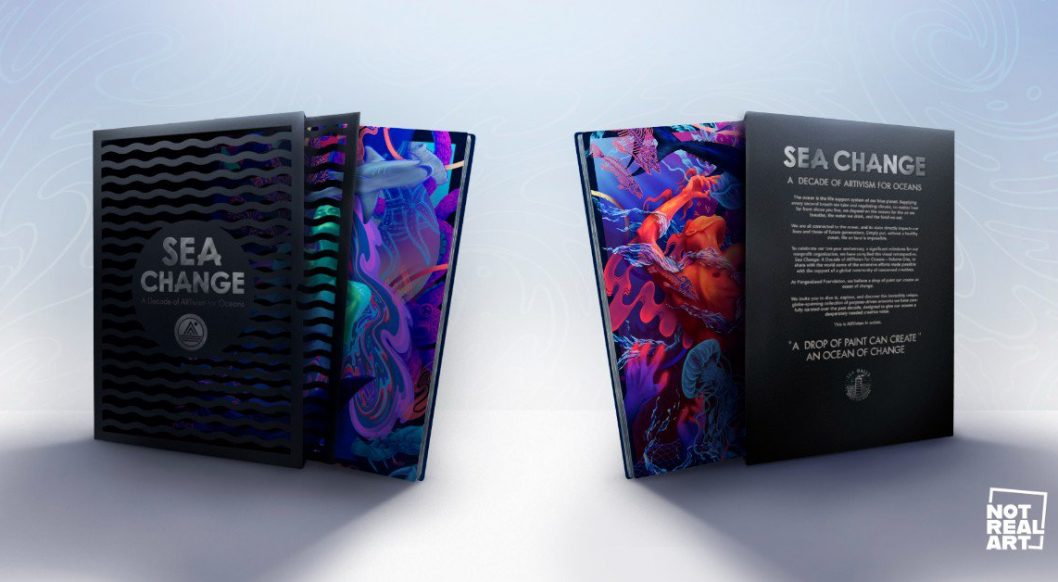 As much as we tend to separate ourselves from other species, human beings are animals too. Our natural ecosystems support all of us, not just the whales or the polar bears we want to save, and the only way we can sustain our lives and our health on this planet is if the planet is alive and healthy. Today’s episode centers around an incredible organization that is doing important work at the intersection of culture and environmentalism to further the conservation of our oceans. Led by Founder and Executive Director, Tré Packard, The PangeaSeed Foundation is an international nonprofit organization that seeks to raise awareness and create positive change using what they call ‘ARTivism’.

Tré is a renowned public art curator and award-winning environmental photographer who marries art and activism to cultivate a new era in marine conservation and, in today’s episode, he shares some of the groundbreaking work that PangeaSeed has done with artists like Shepard Fairey and Nychos to raise awareness about the fragility of our oceans. We also gain some insight into what compelled Tré to look at conservation through a different lens and you’ll learn about the recently released book, Sea Change: A Decade of ARTivism for Oceans, which features a carefully curated selection of the purpose-driven artworks that PangeaSeed has collaborated on over the past 10 years. To find out how PangeaSeed is giving the oceans a voice through their unique blend of art and activism, make sure not to miss this insightful conversation with Tré Packard!

“How can you get people to care about something that they don’t have a connection to? That’s where I felt art could be [a] connecting point—and it has been. What started out as a novel idea in an apartment in Tokyo over a decade ago has turned into a global movement.” — Tré Packard [0:17:23]

“I had a moment in 2008 where I uncovered the largest industrial shark finning operation in Asia and that really had an impact on me from what I’d experienced and seen before. I felt compelled to do something by shifting gears and looking at [conservation] through a different lens. I grew up in a family of artists. My mom was a professional artist and art teacher, my grandfather was a professional musician, so we were always encouraged to problem-solve [in creative ways and through creativity] when I was a kid. Living in Asia at that time, it was really challenging to encourage people to change cultural habits and look at things through a different lens, so to speak. I felt that art could be a great driver, a communication tool to get people talking about things that they otherwise wouldn’t and see [them] in a new light.” — Tré Packard [0:10:58]

Key Points From This Pangeaseed Episode:

To kick off today’s episode, Tré shares his motivations for starting the PangeaSeed Foundation and what compelled him to look at conservation through a different lens. He tells the story of the industrial shark finning operation that inspired him to shift gears and use art as a communication tool to drive change and we gain some insight into Tré’s lifelong connection with and passion for the oceans.

He shares his perspective on how we can educate communities in developing nations about the importance of protecting our oceans and empower them to make meaningful change by “taking the oceans to the streets,” which is what PangeaSeed does through their public art program, Sea Walls. As part of creating a legacy of ARTivism, they have also released a book to commemorate PangeaSeed’s 10-year anniversary, titled Sea Change: A Decade of ARTivism for Oceans, which features a special selection of these impactful murals.

We dive into some shocking statistics about ocean pollution, the amount of microplastics that humans consume each year by eating seafood, and the power we have to reverse these statistics by changing our everyday habits, as well as the ways that religion, politics, and the next generation can influence our relationship with the environment and ultimately stall climate change.

“We realized early on, through public art, through street art, that it’s free source. It’s democratic. You can bring it into a community, into a neighborhood, and transform the way that people look at the environment and their connection to it.” — Tré Packard [0:21:30]

To illustrate the extensive reach that the Sea Walls project has, Tré shares a bit about their time in the remote Canadian town of Churchill, Manitoba, which is considered the polar bear capital of the world, and some of the murals they created there. You’ll also get a sneak peek into some of the murals and creative productions coming your way this summer, including a Sea Change book tour, and Tré outlines what you can expect from the seven major chapters of the book.

He takes a couple of minutes to honor the supporters and patrons of PangeaSeed’s work and lets listeners know how they can contribute to the cause by not only donating to the organization but by purchasing limited edition artworks from the PangeaSeed Foundation Shop too. You’ll also gain some insight into some of PangeaSeed’s corporate partnerships, including their collaboration with Volcom on what they call the DIY Machine, and Tré explains how PangeaSeed works to actively support and benefit the artists that they work with.

“We want to give the artists an experience where they’re not just stuck in a parking lot for a week, which happens with a lot of mural projects. We work with the [local] community to do environmental and cultural excursions.” — Tré Packard [0:51:42]

“I didn’t want to be like the typical nonprofit organization model where [you just donate]. There’s not a lot of transparency and I hope that there are other ways to do that that support artists and support our programs and so on. By purchasing the book, that’s a great way to support what we do. Through our Printed Oceans program, [you can support us] by buying a print. That helps what we do and it supports the artist that [created] the piece.” — Tré Packard [0:47:07]

You can stay up to date with PangeaSeed by following @pangeaseed or @seawalls_on Instagram. You can also learn more about Tré’s work by following him on Instagram @abovebelowphotoor connecting with him on LinkedIn.

Thank you for taking the time to listen to Not Real Art, hosted by Scott “Sourdough” Power.