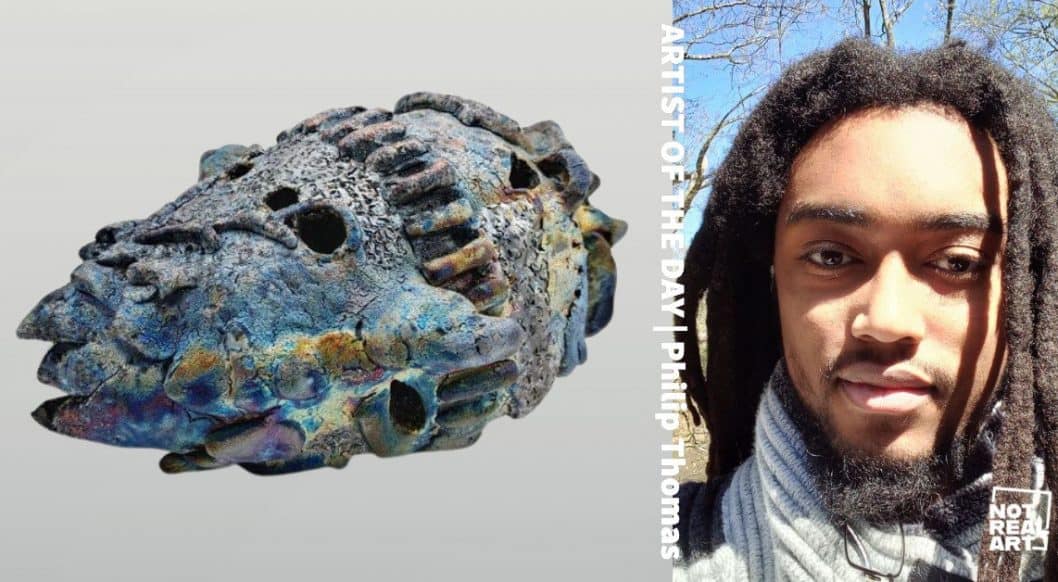 Philip Thomas is a ceramic artist and science-fiction writer from Connecticut who’s been sculpting since he was four years old. His work centers on a fictional universe with seven habitable planets, a pantheon of gods, over twenty different intelligent species with diverse cultures and religions, and an ever-expanding list of animals and creatures.

For Philip Thomas, the universe is of his own making. Something he can shape and form, solidify in a kiln, or embellish with words. Unlike most people, who take the world at face value, he creates alternative habitats. With diversity as a navigational star, Thomas charts his own course and sets off into the unknown, fashioning unique characters, environments, species, and cultural norms.

My goal is to blend the mediums of sculpting and writing to create a living, breathing universe for myself and others to explore through storytelling and my sculpted artifacts. In this act of characters coming together within the story it gives a lesson to the audience about the importance of diversity. How people of different walks of life can come and work together to solve the issues that are facing them. – Philip Thomas

Despite receiving mixed signals in college about his double major in visual arts and writing, Thomas forged ahead with a multi-faceted route. Determined to explore other “worlds, species, cultures, and storylines that he created himself,” he hoped to inspire others who felt disenfranchised from society. His recent series of Raku-fired ceramic sculptures, created during a residency at the Truro Center for the Arts, consists of artifacts from a ruined civilization that appear in his Sci-Fi novel in the works.

Horned censers, ancient relics, and codexes bring his words to life and vice verse. Thomas’s focus on a lost civilization, and his pursuit of multiple creative channels, combines the material with the ethereal, and the virtual with the real. His blend of tangible objects with words feels timely and relevant in a Zoom-based society emerging from COVID isolation.

I am creating my own universe within a Sci-Fi Fantasy narrative that deals with issues of spirituality, the growth of technology, aspects of racism, the threat of extinction, the corrupting nature of power and greed, and the teachings of morality. Through the different mediums of ceramics, drawing, writing and 3d software, I am able to use my skill sets in hand-building, glazing, Raku firing, modeling in 3-d and rendering to create a world in which to explore these themes. My time is spent designing these characters, their appearances, clothing, beliefs, religions, triumphs and tragedies. Creating maps, and ideologies, I use our history to tell the story of another world.

The Horned Censer, much like other censers holds an almost sinister visage of a face. This one in particular has four horns protruding from its top layer. Its glossy iridescent colors are what attract attention, giving it an otherworldly presence. Like all censers, this one has a long-hidden past that has been forgotten by the modern age.

The Idol of Song is an artifact from my universe that is going to play a major role in the current sci-fi fantasy novel I am writing. This piece was built in four parts out of white raku clay, and the four pieces fit together to form the completed idol. The Idol is a mysterious artifact unearthed from the bowels of ancient ruins on the planet Jirda. A faint melodic song is rumored to be heard coming from inside the relic.

The censers are an enigma within the three living worlds. They have been found across each planet, but no one knows their exact origin. They have a strange, otherworldly presence to them and are from an age that has long passed. Many people are drawn to them through their colorful visage and strange design. These relics are often kept by the ruling class as a sign of prestige, while knowing nothing into the nature of their long forgotten past.

This relic predates the Age of Reclamation and any historical records found within the three living worlds. This shrine shows a mysterious being sitting showing signs of praise, charity and “have no fear.” Many have gazed upon this object and see it as ominous, unable to read the inscriptions found among the relic. Some historians have theorized that the three pillars are representations of the three living worlds.

The Codex Relief is a long box-like structure with landscape reliefs sculpted into the long faces of each side. This object is meant to be a vessel of knowledge, housing and immortalizing information within it. The relief scenes here are of daily life or stories passed down and told again and again to the culture of Serhai who created it.

Philip Thomas is a ceramic artist and writer based in South Windsor Connecticut who has been sculpting since he was four years old. He graduated with honors from the University of Hartford with a Double Major in Ceramics and Sculpture and a Minor in Art History. Thomas studied at the University of Hartford for a year after graduating in their Post-bac program. In early 2021, he was selected to be the artist in Residence at Truro Center for the Arts at Castle Hill. During the residency he concentrated on Raku firing which has become the focus of his work.

On the Web And Social Media

Here’s where to find out more about Philip Thomas on the web and social media: