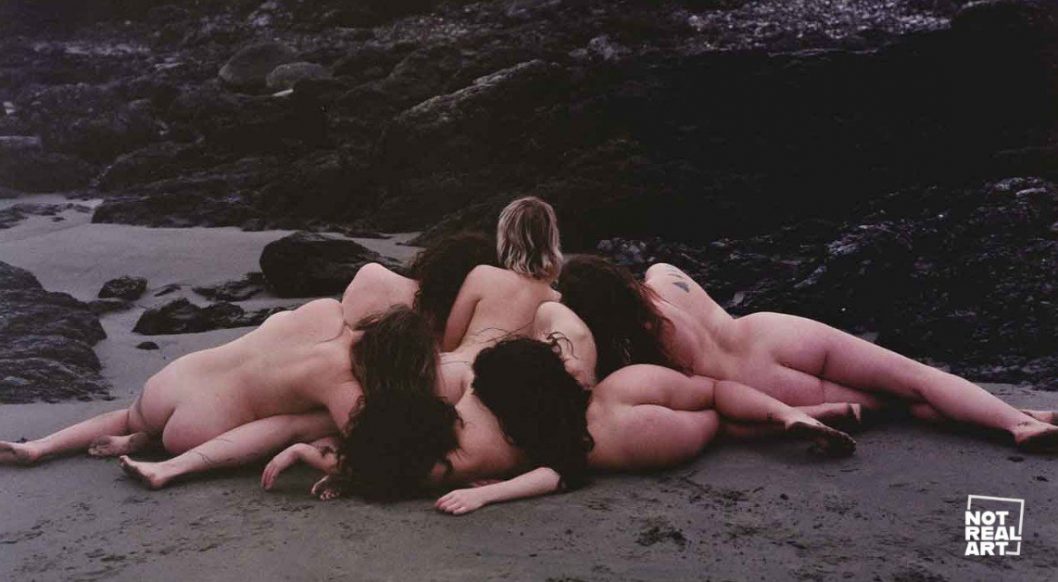 Photographer and stop-motion artist Kelly Zantingh captures the intimacy of time and touch with her moody portraits. Based in British Columbia, the Canadian artist specializes in landscape photography that exposes the human body for the fragile organism it is.

Zantingh shoots around a transient lifestyle, capturing people and places throughout biodiverse British Columbia. Her work is marked by an early interest in the natural world, its histories, and its future. “The first few years after graduating, I was very invested in themes of climate change, the anthropocene, and human interference with the environment,” Zantingh says. “I often expressed these themes through related ideas such as anthropomorphism, cognitive dissonance, and romanticization of the natural world.”

As the artist roamed, so did her work. “Over the past few years, my work has branched into new directions, and I'm working with themes of intimacy, vulnerability, and touch,” she says. Nearly always accompanied by a natural background, the subjects in Zantingh’s work strike ritualistic poses, twisted around stones, or folded over one another like fallen leaves. Her lens seems to linger over each fleshy curve, gently infusing the human body back into the landscape.

With this approach, Zantingh ponders the many ways we experience intimacy. Her photos showcase a tactile vulnerability, one that oozes into the surrounding landscape with muted strength.

Kelly Zantingh discusses the importance of making cringeworthy art, surrounding yourself with a creative community, and the benefits and drawbacks of living a nomadic lifestyle.

What do you wish you learned in art school but weren’t taught?

Kelly Zantingh: How to feasibly make a living as an artist. How to apply to residencies, grants, grad school, and everything in between. To be fair, I did learn a little bit of that stuff, but not nearly enough. More importantly however, I wish I learned more about career prospects for those uninterested in following traditional "art careers," i.e. curator/professor/etc.

KZ: Make everything, make bad art and fail. Failure is super important to being an artist, but is also great advice for anyone, and life more generally. We need to unlearn how we think of success as a lack of failure, as failure is an important part of success, and of learning and growing. Although we may look back on some of our previous work and cringe, we learned something from making that work, even if it was only that we don't want to make that kind of work again.

Not exactly advice, but I'd say be wary of anyone who tells you not to explore a topic/theme/media that interests you. In an art school critique, I was once told to "stop" doing what I was doing on a drawing project, and while I appreciate why I was told this, I don't agree. Run an idea into the ground, beat a dead horse if that's what you need to work through an idea.

What's your biggest barrier to being an artist?

KZ: The traditional barriers: time and money. I don't exactly work in the art world, at least not in the sense that I'm paid for it. I work in an entirely different industry so that I can afford a lifestyle that allows me to make art when I'm not working. I work seasonally, so that means in my off-season I can really focus on my projects. However during the work season I have to almost entirely put my art-making on hold.

To be honest I don't usually find money to be much of a barrier to making work, mostly because I've adapted my art and lifestyle to making work that is cheap. However, showing and distributing art would be a lot easier if I had more financial flexibility and wasn't away from the city half the year.

Also, a large part of the financial barrier has to do with funding for non-traditional, artist-run, and DIY spaces. These are the kinds of venues I'm most interested in showing at and participating in, but they tend to have the least financial support.

KZ: Although at times it can be challenging, I'm quite fortunate that I've found a job that allows me to only work about half the year. I work seasonally in forestry, so I typically have the entire winter off. This is excellent for having long stretches of undisturbed time to focus and dedicate to art-making. However it also means that from April to September, I likely won't be able to make anything or participate in the art world very much.

What role does the artist have in society?

KZ: I think there are multiple roles an artist can take on that are all equally valid. One of these could be a cultural critic, someone who forces the public to gaze into the collective mirror. This role could also mean one who forces viewers to challenge their own beliefs and preconceptions about the world, or makes viewers uncomfortable.

I also think we need artists who serve the purpose of entertainers. Like some actors and musicians, the world would be a very boring place without content creators that make the world a bit more beautiful, more joyous, and who can point out the magic in the mundane and everyday.

What’s the worst job you’ve ever had?

KZ: When I was a kid I had a paper route. It was a surprising amount of work, and organizing the flyers often took so long that I had to employ the help of my mom to get it done on time. I think I made like $30 every couple weeks.

As an adult I had a job at a fancy supermarket/bakery/restaurant, which was fine, but the work atmosphere was incredibly toxic. The supervisor and owner were very unkind people who would yell at employees, insult them, and publicly humiliate them. I lasted a couple days and was out of there.

What’s your relationship with money?

KZ: I've never made much money off of my art, which is both a blessing and a curse. For me it works because I have another job that sustains me, so that I don't have to rely on art-making for money, which I think can be pretty tricky business. This is certainly not the case for everyone, but I feel like if I were in that scenario, I would end up making work that I don't like and isn't for me. Having a non-art related income means I can make whatever I want and not worry about whether it will generate capital or not. Which is liberating, but at the same time, it would obviously be preferable to find a way to be a full-time artist and for that lifestyle to be sustainable. Unfortunately, it isn't for most people.

KZ: In the spring I shot thousands of photos for a stop-motion animation project. It's actually almost done, it just needs to be edited and I'm having a friend create the score for it. It won't take too long to complete but unfortunately I've put it on pause for the planting season. So I'll complete it in November when I'm back in a more suitable working space in Victoria. Aside from that, I've got a few small photo projects on the go, and I'm interested in learning how to tattoo!

KZ: Finding a balance between eating properly, being productive and creative, and getting outside and staying active. But even more importantly for me is having a sense of community and belonging. Being surrounded by close friends who are creative, supportive, and can make me laugh is what keeps my mental health at its best.

How does your geographical location affect your work and/or success?

KZ: In all honesty, my geographical location isn't doing me too many favors in terms of pursuing an art career. As I mentioned earlier I work remotely half the year and live out of my car, and am only living in a city with an art community about half the year at most. I would also probably have a lot more access to an art scene and more opportunities if I lived in a place like Toronto or Montreal, but living on the west coast has been better for my mental health and being able to work in forestry. It's really important for me to be able to get outside regularly, and living on the island means I can go hiking, surfing, and camping year round.