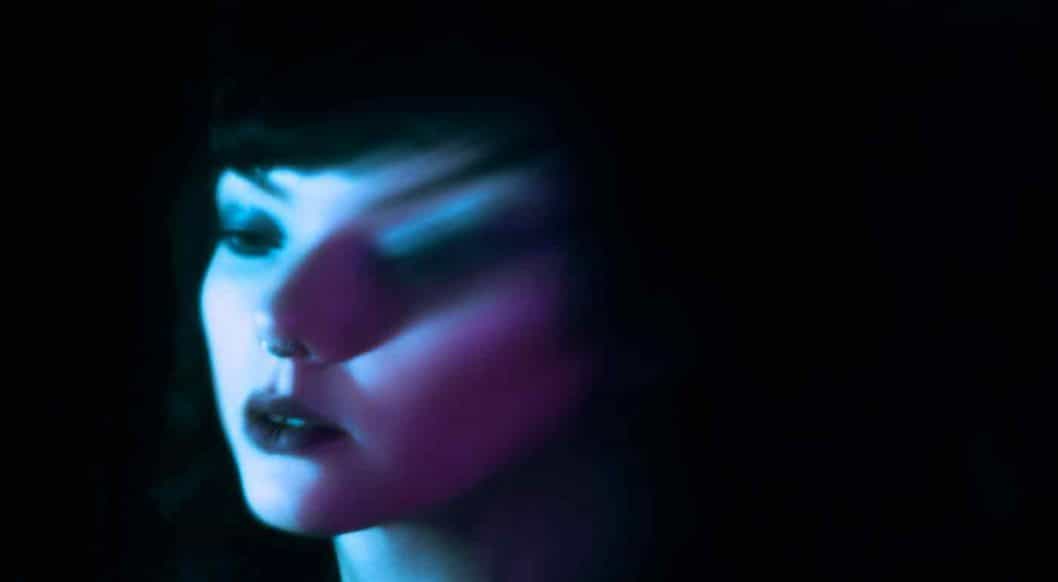 Originally an art class model, Rawson soon grew tired of life in front of the camera. Their almost entirely self-taught photographic works look at the nature of inner reality through the lens of their own mental health. “It's been quite cathartic for me to bring my inner world to life,” she notes in her artist statement. With a background in experimental video, Rawson credits their photographic success to past experiences in the avant-garde. Their figures, posed in front of velvet curtains and smeared in blue-black light, live in an insular world, powered by dark magic and cyberpunk style. In the UK, Rawson shoots with modeling agencies and fashion designers, an interest that bleeds into the baby bang- and platform shoe-aesthetics of their photographic work.

Rawson isn’t shy about wearing their influences on their sleeve—The Matrix, Blade Runner, William Gibson’s cyberpunk writings, and the deliberate digital errors of glitch art—but their work stabs inward rather than out. The cyberpunk genre, which Gibson is credited with inventing, mixes high and low tech to critique the philosophical dilemmas that unfold in futuristic dystopias. Rawson borrows the genre’s aesthetic by casting themself as the elusive protagonist of a film we’ve not yet seen, choosing to jettison the hazy neon lights and social commentary in favor of moody reflection.

In their self-portraits, Rawson imagines themself as the raven-haired Trinity from The Matrix, or perhaps as bioengineered femme fatale Rachael from Ridley Scott’s Blade Runner. The iconic male characters in these films grapple with existential riddles, aided by their sexy sidekicks—a setup that leaves little room for true introspection. Rawson dares to imagine a film where the femme fatale plays the lead, acting as an agent of emotional magnetism rather than a force of destruction.

Morrigan Rawson discusses their personal version of vulnerability, the danger of meeting your heroes, and the nuanced world-building of Petra Collins.

Morrigan Rawson: Hamonshu: A Japanese Book of Wave and Ripple Designs. It's two whole books of exclusively wave and ripple illustrations done a million different ways. To me, this book is a reminder that there are a million ways to do one thing. And if I ever feel stuck for any reason, I like to look at this book and remind myself that creativity is only limited by our own minds.

MR: No one. I don't believe in meeting your heroes.

MR: I don't always know. Sometimes I think I'm trying to convey the nature of my own reality. But sometimes I think I'm just trying to make sense of my emotions. My work is quite dark, both aesthetically and thematically, and I like to think that's my version of vulnerability. Vulnerability is a feeling I really struggle to convey on a day-to-day basis, so it often ends up coming out in my art instead.

MR: Yes and no. I don't take trade projects that don't feel like trades. If the concept is something I hate, then the exposure isn't worth it because the photos won't be an accurate representation of me or my work. And then I would just get jobs I don't like, which is pointless. But if we have similar styles and I think I could really expand my portfolio or following by taking that trade, then it's absolutely worth it. That feels like strategic networking to me. There's a lot to learn in working for free. It's humbling. You learn not only who values your time and labor, but how to value your own work.

MR: It feels impossible to pick just one, but I would have to say Petra Collins. When I first started shooting I didn't understand her work. It felt girly and playful and soft, all the things I was pushing against in my own life. But as I grew into myself and started finding my own style, I saw all of this incredible nuance within her work. This type of world-building that I really aspire to achieve. And I found that all these themes I was trying to reject ended up being the most impactful for me. I believe she brought softness and surreality to the forefront of photography in a way that many of us were craving deep down.

MR: Getting a Global Talent visa, hands down. It took me almost a year to get my visa from start to finish. I had to get published a ton of times and get letters of recommendation from significant people in the art world, and I just couldn't believe all these people were willing to help me. Having so many people and magazines support me during that process was really moving and made me realize that other people believed in and connected with the art I was making.

MR: No. I got a minor in experimental video in university and I learned more in one day on a real set than in years of video classes. I started shooting on a broken camera with no viewfinder and I still learned more just actually doing it myself and feeling out what I did and didn't like. School is great for connections, but so is Instagram. And Instagram is free.

MR: I wish more people realized that the number of followers you have doesn't even remotely correlate to your talent or creativity. There's so many really incredible artists with such small followings and they often get dismissed.

MR: I would rather be historically significant, though the concept of leaving a mark on the world at all seems very counterintuitive to enjoying the moment. I don't have much interest in being some rich and famous photographer. I'm much more concerned with creating something that makes me happy and connects people.

How do you think the coronavirus pandemic will impact the art world in the long term?

MR: As far as visual art, it seems like digital rendering made an exponential jump since so many artists had so much time on their hands to learn a new skill. And now a lot of companies are hiring digital artists to render full worlds rather than pay models, casting directors, makeup artists, photographers, etc. I absolutely love rendering as an art form, but long term, I think it's going to dramatically change the art-world landscape.

MR: I just did a shoot with the amazing Jess Strawberry that I'm in the process of editing currently! I've been dying to shoot with her because she has such a unique style and we have similar visions.