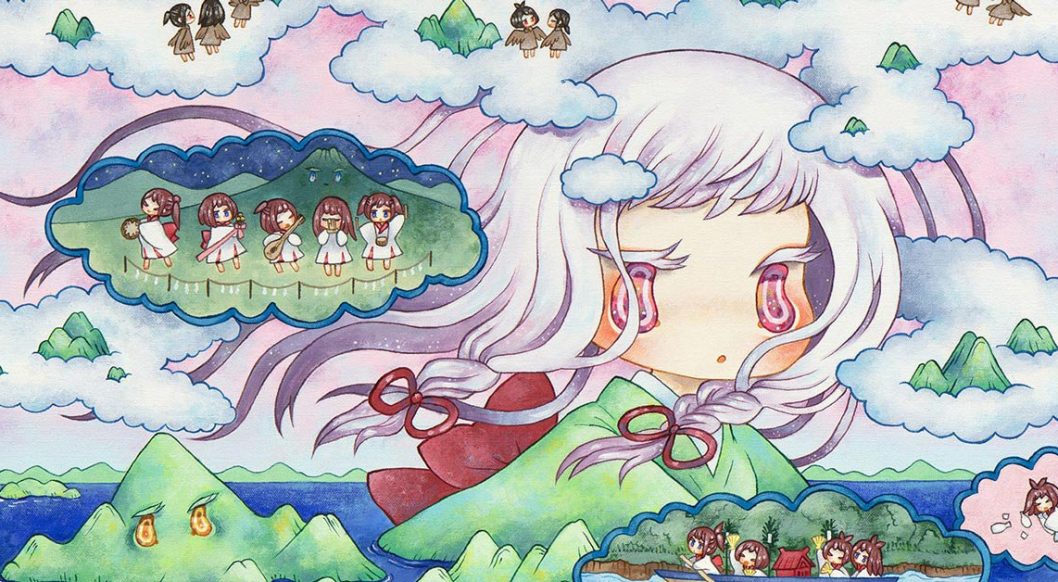 Instead of one god, there are approximately 8 million divine beings pulling the strings in Japan. Emerging Tokyo-based artist Ryoko Kaneta creates manga-style artwork that plays on an ancient Japanese philosophy: that god dwells in all beings throughout the universe, perhaps appearing as a cool breeze or a fluffy cloud in the sky. “Since ancient times, it has been believed in Japan that all things have gods and life,” the artist explains.

Ryoko’s first solo show in the US, In Our Nature at Corey Helford Gallery in downtown Los Angeles, features 14 new works that celebrate the ephemeral nature of being. In awe of the world around her, Ryoko breathes life into Mount Fuji by stamping a pair of all-seeing eyes onto the mountainside, and turns a waterfall’s cascading currents into lazy coils of blue hair. Ryoko’s female characters, as mercurial as the changing seasons, “are anthropomorphic beings of nature and invisible things, similar to the feeling when Japanese people see mountains or the sea and feel the existence of God.”

Using scenes of nature portrayed and celebrated in ancient Japanese literature, Ryoko taps into the philosophy of the Rinpa and Kanō painting schools, famous for the delicate simplicity of their landscape scenes. Far from mundane, Ryoko’s work is meant to give goosebumps. In the grand tradition of sublime, wide-eyed nature painting, Ryoko whisks us away to the edge of a cliff, to the top of a mountain, and high into a cloud-filled sky. Situated from her vantage point, the view raises more hairs than you can count.

In Our Nature is on view at Corey Helford Gallery in downtown Los Angeles through July 30, 2022. Also on view at the gallery, Hikari Shimoda’s Fight to Live in the Void is up through the end of July. For more information, please visit the gallery’s website here.

“Since ancient times, it has been believed in Japan that all things have gods and life.” — Ryoko Kaneta

All photos published with permission of the artist(s); photo credit: Kohei Fukushima.