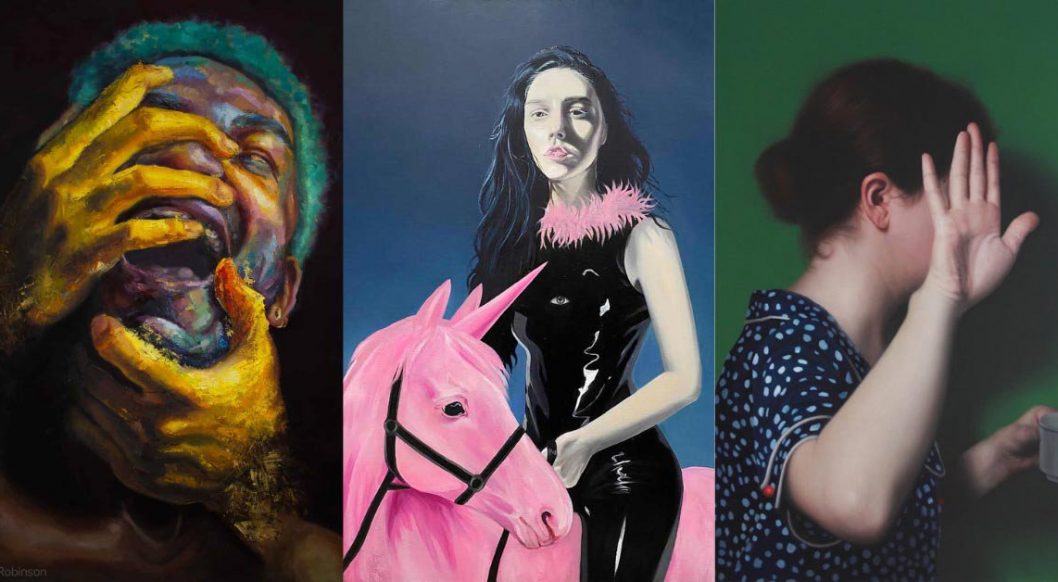 Reflections on the New Year: 5 Artist Who Immortalize Themselves Through Self-Portraiture

New Years is often a time for list-making, lofty goals, and new haircuts. While we love a new ‘do, the cold winter months also provide plenty of downtime for reflection. Before leaping forward into a new year, we’re slowing down to revisit a few artists who contemplate existence and identity through their self-portraiture.

Throughout the centuries, self-portraiture has remained a time-tested practice among artists of all stripes. Appearing in every major art movement, from the Italian Renaissance to the contemporary period, self-portraiture transcends style, technique, and time.

Beyond recording the artists’ likeness, the self-portraits below cover an eclectic range of styles and themes. From one artist’s makeshift bedroom photo shoot to another’s exploration of Black masculinity, these works wrestle with the most fundamental of questions: who am I?

Working with a glut of restrictions over the pandemic, photographer Elisheva Gavra challenged herself with a series of somber self-portraits. Created over two 14-day periods of lockdown in Tel Aviv, the artist’s austere portraits are the surprise result of a makeshift bedroom photo session, quick costume changes, and an overwhelming amount of stress. Now based in NYC, over two years into the pandemic, Elisheva looks back on these photos as coping mechanisms: “The portraits make me think about imagination and photography as my tools to navigate the helplessness and stillness of isolation,” she writes in her artist statement.

In a Cindy Sherman-esque exploration of the transience of identity, Elisheva shows an ability to transform her appearance and dictate the commanding moods of her portraits. “[Portrait photography is] a device for constructing identity, wherein the act of looking and being looked at are put on display,” she notes. With full creative control but limited supplies and herself as the only model, Elisheva shows how personal identity can be masterfully altered with mindful composition and a few decorative modifications.

Densely packed and saturated with clashing colors, Izumi Miyazaki’s figure paintings often center on the artist’s experience as a Japanese American woman. Creating her own microcosm of family, friends, and community, Izumi renders her figures with heavy distortion to represent the stress and struggles that consume them on a daily basis.

In her self-portrait “You Speak Good English,” Izumi raises a pair of craft scissors to her tongue, dangerously close to making the cut. Inspired by a run-in with a stranger, the work expresses Izumi’s frustration with how she’s perceived, even in her home country. “Although I was born and raised in America, I still get told [you speak good English],” she tells NOT REAL ART. “This is a self-portrait of myself literally cutting off my mother tongue.”

Where do you go when you dream? Contemporary Georgian artist Mako Lomadze plucks imagery from her subconscious escapades and creates oil paintings laden with surrealist symbolism. Just as our minds spin everyday events into far-fetched dreams, Mako translates her personal experiences into absurdist narratives.

Mako embraces her role as the main character and star of her work, often appearing in spectacular pink accessories worthy of a Hollywood starlet. “[My] art responds to the role of a woman in the modern world,” she explains. “[My] portraits illustrate the stages of self-contemplation, deep sensual issues, and shows the essence of true self, embraced by loneliness.” Bound in a black pleather catsuit and straddling a pink unicorn, Mako defiantly returns the viewer’s gaze in “I Overcame Obstacles.” She often “conduct[s] the tragic sense of existence [in] an aesthetic way,” transforming personal traumas into candy-colored fantasies.

Based in Vancouver, Cara Guri turns traditional portraiture on its head, commanding audience attention with mind-bending compositions and an airbrushed, hyper-realistic style. “I am interested in the balance between consumption and denial in painting: the information that is given to the viewer and that which is withheld,” she says. “Frequently using my own body as a reference, I explore self-image as an extended object, and how the tropes of historical portraiture define and negate identity.”

Cara denies access to her figures, concealing their eyes with braided hair, molded glass tumblers, and outstretched, objecting palms. Or she simply paints them from behind, teasing viewers with a partial view. She explains: “My paintings place a barrier between the viewer and the subject, questioning the role of portraiture and the conventional dynamics of the gaze.” The gap between Cara’s painstaking painting style and her refusal to provide emotional release creates tight-wire tension throughout each work.

It’s all subjective, Eric Robinson’s semi-autobiographical works seem to say. The Maryland-based artist specializes in the sort of stripped-down portraiture that arouses a spectrum of emotion from its viewers.

To tease out the subjective experience of viewing his work, Robinson fills the entire canvas with eyes, lips, nose, and hair, leaving the background intentionally blank. “A painting with a clear intent from the artist can be read in a multitude of ways without background context, usually with a personal emotional connection,” Robinson notes. His work takes an added intimacy from its subject matter—close friends, family, even himself. Robison has a noticeable shock of aquamarine hair, which he uses as a foil to the rich golds and browns of his otherwise earthy palette.

More than an analysis of color and form, however, Robinson’s work looks at Black masculinity through a forgiving lens, leaving room for multiple perspectives and conflicting narratives. His self-portraits, in particular, are psychologically dense, and loaded with symbolic meaning. “Gender, sexuality, spirituality, and pathos all inform my work,” Robinson tells NOT REAL ART. “I'm essentially interested in how these inform each other, which then informs my work.”