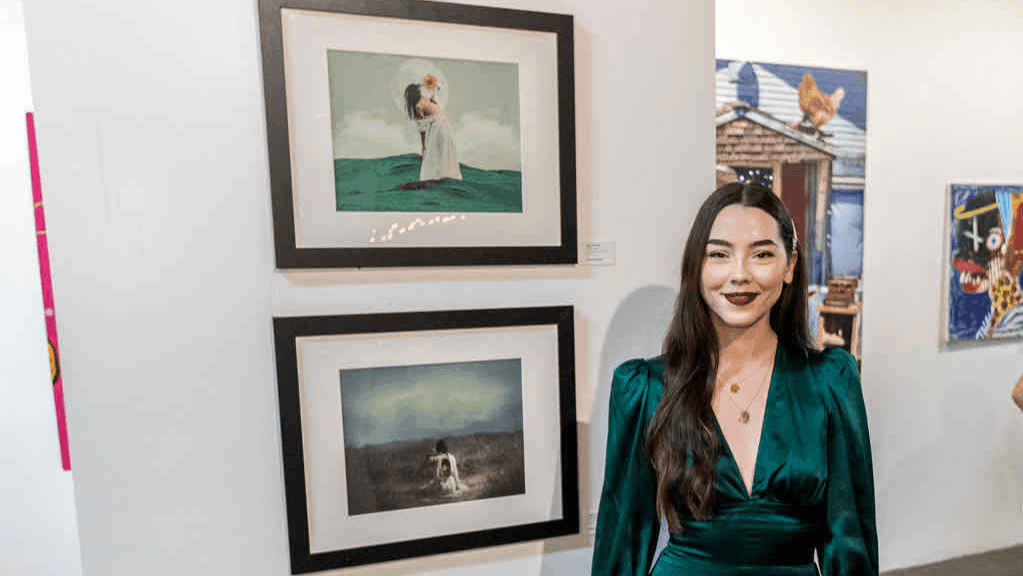 Talya Covello was born and raised in Culver City, California. While in film school, she discovered that she naturally gravitated towards production design because she “liked that whole aspect of building worlds.” But, production design didn’t fully engage her artistic expression and she had always liked photography, a talent her father recognized in her early on. “He knew I was going to be a photographer. He always told me, ‘follow my heart, do what you need to do.’”

When Coviello found out she’d won the Not Real Art Grant, she found it to be surreal. “Photography is something that I really want to do. It's weird to get rewarded for it. It felt really good…sometimes it's hard to put yourself out there. Especially with the criticism and then all the rejection. So after a while, it gets a little bit disheartening. And when something like this happens, it's amazing.”

Diagnosed with Meniere’s disease in 2015, Coviello finds solace in her art and photography. “It’s vertigo, but you also have temporary hearing loss. So not only are you partially deaf for a certain amount of time, but you're also really dizzy. Sometimes I can't really do much, so it's very restricting. And, sometimes it causes depression for me.”

“The greatest thing about being an artist is that an idea in my mind gets put out into the world and people get to see a little part of my soul.”

When asked how the disease has impacted her art, Coviello admits she feels a little braver. “Now I don't feel like this indestructible young person. Every year, I'm getting older. My body is kind of attacking itself. I feel like I need to be able to tell stories.”

“One thing that is always in my art is the topic of mental health. I want to be able to connect to other people who are feeling the way that I feel. I just want to communicate to the world that, you know, life is hard and we're are all in this together…I want them to know that I see them and I understand. No matter how dark it gets, there's always art, there's always a way to convey your emotions.”

“I come up with an idea first and sometimes inspiration doesn't come to me very easily, so I listen to a lot of music or watch a lot movies. A lot of my images are based off emotion – a certain feeling that I'm experiencing at the moment. I do self-portraits, so I'll put my camera on a tripod and my camera is on a timer…and I do my little my little poses. Once I'm done with that, I take it into Photoshop and then that's when I start piecing all my photos together.

Coviello doesn’t think people should limit themselves in life, or in art. “I'm not only going to be a photographer, I want to be a bunch of things, you know? If I can create costumes or create sets or whatever – as long as I'm being artistic, then that's exactly what I want to do. I think people should live their lives that way, as well.”

When asked if she has favorites among her pieces, she replies, “Oh, my God, that's hard because all my pieces are just parts of me, they’re my little babies. It's kind of hard to just pick one that I really like, because it's all me!

“Lately I've been doing more collage style, mixed in with my style and I really like it because it's become more freeing to me. I actually submitted one of my pieces to a contest and I got feedback that it was not based in reality, this it wasn’t realistic. That's what inspired me to just be like – I don't care. I'm just going to create whatever I want. It doesn't have to be real, because it's art!”

“I would definitely say Brooke Shaden in is one of my influences. I just love her art so much. I saw her photography and I was like – I want to try something like that. I didn't know that you could do that with photos. It looked very fun and freeing…I like that I can just pour my heart out on an image. And Tim Burton is one of my favorite directors. I love the way his mind works. And Wes Anderson, definitely.”

The greatest thing about being an artist

“The greatest thing about being an artist is I get to create stuff, than an idea in my mind gets put out into the world and people get to see a little part of my soul. That's pretty cool.”