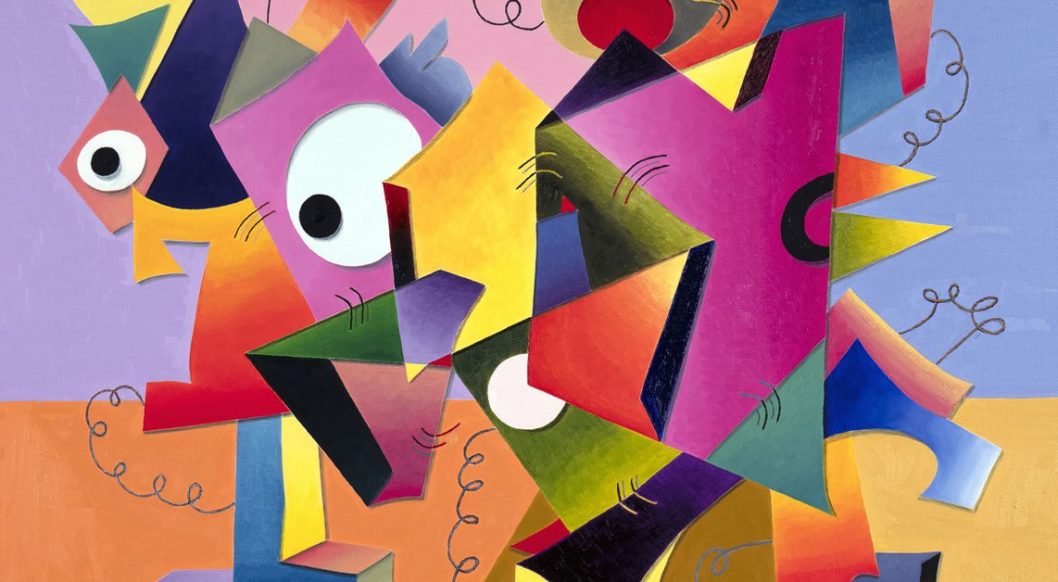 “Arranging black glyphs on white paper grew tiresome.” And, with that, Thomas Brodhead turned to painting following a 20-year career as a classical sheet music editor and music typesetter.

Thomas’ Chromatic Geometry series, inspired by Stuart Davis’ improvisational, jazzy paintings, embraces lively color as he leaves his black and white world in the dust. The familiar glyphs, however, sneak their way into his paintings as thin black lines, curling and flicking like grace notes and quarter rests.

Informed by 20th century classical music, Thomas’ compositions reveal a cast of quirky characters, fractured by the pressures of modern life. One modernist composer gets a special shout-out from Thomas: “[My] work undoubtedly owes a debt to the music of Charles Ives, whose polyrhythmic and poly-temporal sonic landscapes translate into the intersecting planes of color and contrast,” he says. “Just as Ives depicted the transcendent chaos of American life in sound, [I] mirror the electronic entropy of our hyperconnected lives with color.”

Referring to his work as “cartoonish and comical,” Thomas includes a tongue-in-cheek statement alongside each work. The caption for “Twitteropithecus” pokes fun at our collective obsession with social media, which Thomas calls “infantilizing.” He writes:

Twitteropithecus (/ˌtˈwtərəˈpɪθɪkəs/, TWƏ-tər-ə-PITH-i-kəs; from English twitter ’dipshit’, and Ancient Greek πίθηκος (pithikos) ’ape’) genus of late-stage hominins that existed in Silicon Valley during the Late Sociomediocene and Early Blockchainocene. Motivated by greed and fueled by disregard for all other life forms, this creature drew its energy from anger and division engendered in users of its products, all of whom eventually succumbed to a dopamine diet that proved their undoing.

Veiled in farce, Chromatic Geometry slyly critiques 21st century transhumanism by turning a funhouse mirror back on its iPhone-holding audience. “I suspect I’m channeling the pixelated colors of computer screens that we all ogle daily,” he admits. “Human interactions have become difficult and contentious, so we retreat to the comfort of electronic devices, whose screens pull us farther away from one another […] rather than moving us into communion.”