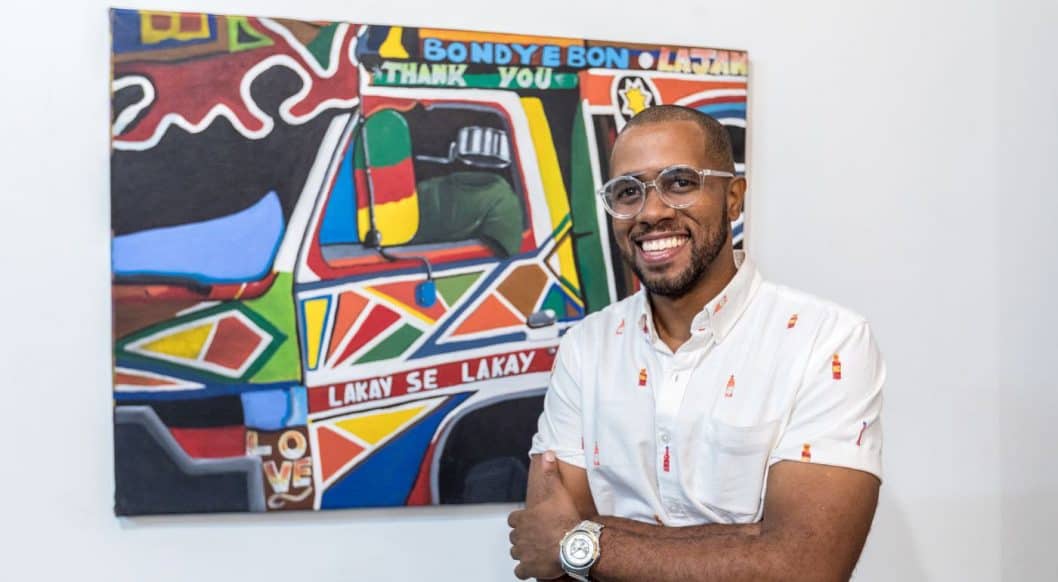 Thony Loui was born and raised in Haiti and always knew he would be an artist. “I loved art, but I didn’t get serious until I was in high school when I made a logo for a famous local band.”

This brush with fame wouldn’t be Loui’s last. In 2018, he was commissioned by Conan O’Brien to paint Conan’s portrait on the back of one of Haiti’s tap-tap buses. “He gave me 24 hours to do the painting on the tap-tap bus, which I did!”

The Conan O’Brien Show led Loui to Los Angeles where his planned one-week stay morphed into four months. While in L.A., he applied for the Not Real Art grant and was surprised to learn that he’d won. “I thought I was just an invited guest at the conference. Then they were calling people to go up on stage. They called my name twice and I realized – oh, that’s me! I won! I was so shocked.”

“Let’s treat each other better. Let’s live in harmony with this world because we only have one.”

In the beginning of his career as a self-taught illustrator, visual artist, and graphic designer, Loui worked for several marketing companies. After Haiti’s devastating earthquake, he decided to take advantage of a program offered at Altos de Chavón School of Design in the Dominican Republic. “It's one of the finest illustration schools in the Caribbean. After the earthquake, the school had a special discount for Haitians because we were really affected by the earthquake. I started to develop my skills and created the first Haitian superpower.”

“DJATAWO is a hero for today’s troubled times”

DJATAWO (pronounced “Ja-ta-woh”) “is a superhero who fights crime and in particular, crimes against children–and he protects human rights around the world,” reads the DJATAOW website. Loui created the superhero so that “Haitian kids would have someone to look up to.” The comic book debuted at New York’s Comic Con in 2015. “DJATAWO is a hero for today’s troubled times and his mission is to bring hope to the Haitian population and build awareness of the problems affecting his beloved country. Haitian culture is promoted through his heroic adventures which raise awareness of the problems affecting all Haitians: Education, environmental issues and pervasive violence.”

“I am also working on an upcoming comic book to present a female superhero. Her name is Tanama and she is here to empower all women and educate the youth about climate change and how to plant trees. I will be presenting the comic book in November at Sunny Purchase College in New York with the Small Farmer Alliance.”

“I learned how to take the different tones of colors and work with the feeling it evokes.”

When asked about the challenges in his work, Loui shared that he suffers from Deuteranopia, also referred to as “red-green color blindness.” Loui first realized he had a “problem with colors” when he was painting with his art teacher. “My first painting was of an orphan kid, kneeling on the earth. I was putting green instead of brown on his face…At first, it was really challenging, but because of the classes that I took, I learned how to take the different tones of colors and work with the feeling it evokes. When I’m working with colors, the name of the color is on the tube so I can deal with it, but when it’s on a palette, that gets frustrating for me.”

Loui mentored with the late Rich Buckler, an American comics artist best known for his work on Marvel Comics. “He passed away three years ago. He's a comic book legend. I met him in New York and I was his last apprentice. He helped me with my comic book and whenever he went to Comic Con, I would go with him and he allowed me to present my book on his table. He was like a father to me, actually.”

“My process is different every time, depending on what I’m working on. I have the privilege of working in different styles, so if I’m working on abstract paintings, I just let go of everything. I think about things that hurt me, things that make me make me laugh and I can liberate myself. The [art pieces] I'm presenting at the [Not Real Art] show are a reflection of my ancient culture and spiritual world; a combination of contemporary art and comic book.”

When asked how he feels creatively in Los Angeles versus Haiti, Loui shared, “That's a good question. In Haiti, the political situation is really frustrating. I use that frustration in my art. I think that's one of the reasons I created a superhero because I wanted to encourage and uplift and I wanted to raise awareness about certain issues that are affecting us in Haiti. So, I use the problems that we have here in Haiti and make them into a villain. For example, there's a lot of litter in the street. So I created a giant monster of litter that the superheroes fight against. My paintings have a message that I’m trying to translate through art because maybe it’s too much to say. In L.A., it’s more peaceful for me.”

On the Critical Voice and Inspiration

“Mine is constantly talking with me. That guy – he is always telling me when I'm drawing, especially when I feel like I don't know how to draw, that I should be practicing more on my skill and not thinking too much because I think a lot. I'm pretty, um, how do I say…tough on myself.

“I would say that my inspiration really comes from Haiti and from my culture. I’m really connected with the people. I don’t come from a poor family, but I grew up near ghettos. They respect artists in the ghetto. I go and play with the kids and do workshops with them at the orphanages. When I look at them and see how much they need and how I don’t have to worry about what I’m going to eat tomorrow, it makes me want to do better. It makes me want to make money so I can help them.”

When asked what he would like to say to the world with his art, Loui answers with gentle determination, “Let’s treat each other better. Let’s live in harmony with this world because we only have one.”