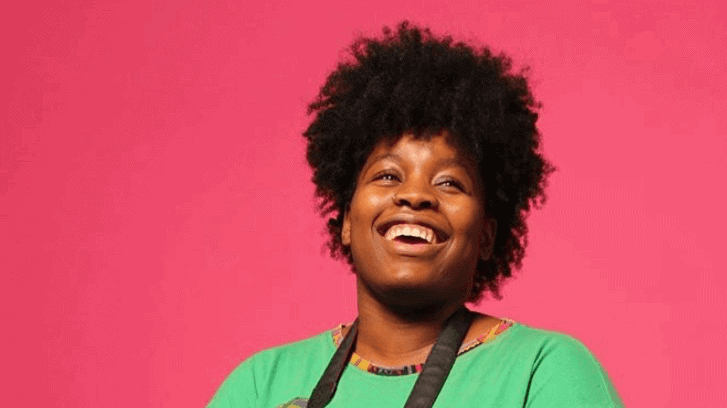 When this interview took place in April, George Floyd was still breathing. The nation and world-at-large were fighting the deadly Coronavirus and adjusting to the subsequent shelter-in-place order, and artist, Tijera Williams, had just found out she’d won the Not Real Art grant. Now, the Black Lives Matter movement marches on through the streets and through our hearts in a worldwide outcry for justice, for reform, and change that is long overdue.

Williams’ recent Instagram post features a 3’ x 4’ acrylic on canvas titled, “The Annunciation of the Transatlantic Black Woman,” with the caption “Being transparent, I love being a Black woman. I, and my sistas alike, possess a power that is incomparable. Black women are pillars, powerhouses, and the source of “inspiration” for soo many Kardashian lookalike culture vultures. ⠀

“I’m slowly harnessing my own power, and in a time like this when everyday Black men, women, and children are being targeted and killed by the hands of racism, police brutality, and just plain ol being Black in Amerikkka, I needed a source of inspiration, a challenge to myself to remember that power, and an uplifting reminder in the midst of the societal power shift that we are fighting for. This piece is for every Black woman. Don’t forget you are powerful. As always and forever more. #blacklivesmatter #blackartistsmatter #blacklovematters”

Williams was born in Long Beach and raised by her single mother in Paramount, a city which she defines as a “marginalized, underrepresented city in LA County.” Williams describes her childhood as somewhat sheltered. “My father was abusive. So I guess I was very protected in that aspect – to not even realize it. I’m coming to grips with that right now.

“I guess I tried to navigate between understanding who I am as a black girl, a black woman and figuring out my likes and my dislikes. A lot of my work now is very open and honest about my childhood and again, I feel like I was sheltered at the same time. A lot happened to me growing up. I’m trying to play positive in this situation because when I am portrayed in my artwork, I want to be completely honest and open, even if they are dark subjects.

“When I was 10, I was raped and sexually assaulted. That led me through a lot of personal identity quests, trying to figure out what it means to be black, what it means in a patriarchal system, and what does it mean in this capitalist system? What does it mean to not be born with the stereotype privilege to, you know, get pulled over by the cops and not feel like I might die? All of these things I learned more and more and embraced once I got into college.”

Williams first knew she wanted to be an artist in kindergarten and still has her early artwork. She recalls the day she picked the artist career card. “I was very lucky. I was advanced…I remember the teacher was pointing out ‘Okay, these are the colors and the numbers’ and I already knew that. They would have firefighters come and visit the kids and the police officers and you know, all these different people. And there was one card that was hanging up in the middle around all these great positions and it was of an artist and I said, ‘Oh, I want to be an artist.’ And that was it.”

Williams started monetizing her artwork in middle school, but it wasn’t until her senior year in high school that she began to choose it as a career. “I was always drawing pictures. I would sell little drawings of me, drawing people’s names, or my doodles for five dollars. It was truly my normal…I was truly brilliant in school. I did an LAPD cadets program where, even though I knew I wanted to be an artist, I was still being enticed with the idea of going into the military to be an officer. I still have a very deep connection and admiration to become a doctor. I wanted to focus on neurology, specifically with the correlation and study of intergenerational trauma in underrepresented and marginalized peoples. So essentially, my ancestors were slaves. I carry the same pain that they do and that goes for everyone, but the studies for those who are black and brown really aren’t as prevalent. So that would be the focus.

“But as a senior in high school, I was still drawing. I was still painting. I think around the same time the assault happened, I just needed some form of therapy. I remember saying that I wanted to go out of state, go out of town, you know, just start a new life. Then I started to see what money really was and the effects it had, so I just thought why not apply to an art school?” Williams applied to Otis and got a response back in under 24 hours, offering a substantial grant, but still leaving her short for tuition and living expenses. “I was really excited to go to Otis but my family didn’t want to cosign on loans or anything, so it became this very intense struggle. My mom had gone to Long Beach State. She went for about three years and stopped because she had me. I didn’t want to go there because I got it in my head that it was about finishing legacies, and my legacy is different from hers. But I applied, I got in, and I went to Long Beach State.”

“It’s a very stressful process because I think so much. There are already so many thoughts that are clouded in my head – I think I have a bit of OCD…I go back and forth between – do I want things to be done as a photo, or do I want them to be done as a painting? I had a professor who I believe is still painting as a professional artist, Daniel Dove. He wanted us to make a collage, a hybrid-style art piece and at the time, I didn’t really have a focus on what I wanted to make. I just made pretty pictures essentially, or that’s how I saw it. But that really helped hone the process.”

Williams says she prefers to paint in the nude for its freedom of expression. “I love to sing and paint. It can get a little obnoxious. I like to blast the headphones and just go and I don’t care if I sound good or not. And I don’t like painting in clothes because I feel that that way I’m most free to create and be honest.”

“I want to be stark and specific with my work and I want my own lane.”

One of Williams’ influences is artist Harmonia Rosales. “I draw inspiration but honestly, I did not know about her until I was done with my degree, though our work is similar. I want to be stark and specific with my work and I want my own lane. But I think that’s something that a lot of artists struggle with. There are so many branches on a tree, and we all want our own instead of just saying ‘I’m from these branches.’ So, I become a new tree. You know, we’re all in the same cluster and it’s okay. If ten people are saying the same thing, as long as there are ten individual ways to say it, that’s all that matters.”

“Right now, I’m painting my birthday of a black woman photo…The painting is more of a black woman protector of black souls, and I guess looking at it more so like this virus, or is it media warfare that’s going on right now? It’s really an attack on your mind. And we need to have space where we protect ourselves individually, and then our families, and then each other because I can’t help you if I can’t help myself. So I’m gonna make sure I finish that piece before the quarantine is over because honestly when it happened, I wasn’t really that afraid. I was more cynical about it happening. But once I saw how easy people are getting [Coronavirus]…and then my friend passed away from it. I’m definitely sad about it, but I just feel numb right now – probably because I can paint and I’m just going to focus on that. Then when the world turns back on I can commemorate my friend’s life.”

“Oh, the freedom. I’m still coming into that freedom. For a long time, I wanted to be very traditional. I wanted to use oil paint. I use acrylic so that I always stay on my toes…I never thought I would be so bold to put myself in my artwork, including nudes and making a book and selling my images. I think that’s the most freeing thing – that there are no bad ideas. It’s not that terrifying. Once you get used to doing it the first time, that’s enough.”

When asked what her most important message to the world is, Williams says, “We’re all in it together. Sure, it seems cliché, but I really do think that we all work together as one piece.” There’s a quick pause, and Williams adds, “Part of me is trying to not be so provocative, but I just can’t help it: Black women are gold. Black men are King. And you can’t change history.”