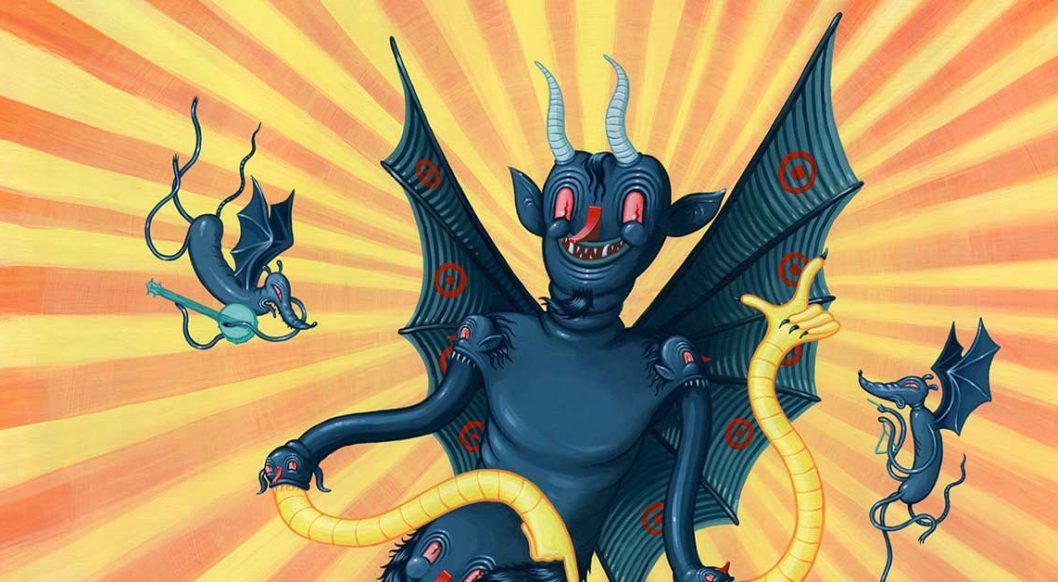 “Death is certain. But I recommend avoiding it,” quips artist, illustrator, and toymaker Travis Lampe.

Influenced by fortune telling, mystical divination, and a healthy dose of pessimism, Travis’ topsy-turvy works are just as wry as his end-of-life advice. His upcoming solo show, All Signs Point to No, includes new paintings and sculptures that tap into post-pandemic fatalism and shoulder-shrugging apathy.

“What does the future hold? It’s hard to say,” Travis muses. “It might be bad stuff though.” Leaning into gloom and doom, the Chicago-based artist resigns himself to whatever whims the fates have in store. Taking an absurdist approach, Travis infuses his work with plenty of dark humor, creating tragicomic scenes inspired by old-timey cartoons of the 1920s and ’30s. While the cartoons bring buoyancy to his work, they also reference pre-Hays code animation, which was frequently scandalous, dark, and violent in nature. From 1934 – 1968 the code censored profanity, suggestive nudity, graphic violence, sexual persuasions, and rape.

Inspired by the likes of Betty Boop, Steamboat Willy, and Dr. Suess, Travis describes his style as "a mish-mosh of those old-timey influences with some Duccio-inspired mountains and the inevitable light-switch nose.” In a nod to the Golden Age of animation, Travis’ work incorporates elements of slapstick humor and “rubber hose limbs,” a stylistic choice that jumps from cute to creepy in a heartbeat.

A pessimistic play on a standard Magic 8 Ball answer (“All signs point to yes”), even the show’s title meets life’s absurdities with mocking glee, choosing to laugh at fate rather than rage against it. Even so, regarding the new works in All Signs Point to No, Travis jokes: “I should have consulted a medium.”

If you’re in the area, All Signs Point to No appears at Corey Helford Gallery in downtown Los Angeles, August 6 through September 10, alongside works from internationally recognized Pop artist D*Face.

“Death is certain. But I recommend avoiding it.” — Travis Lampe