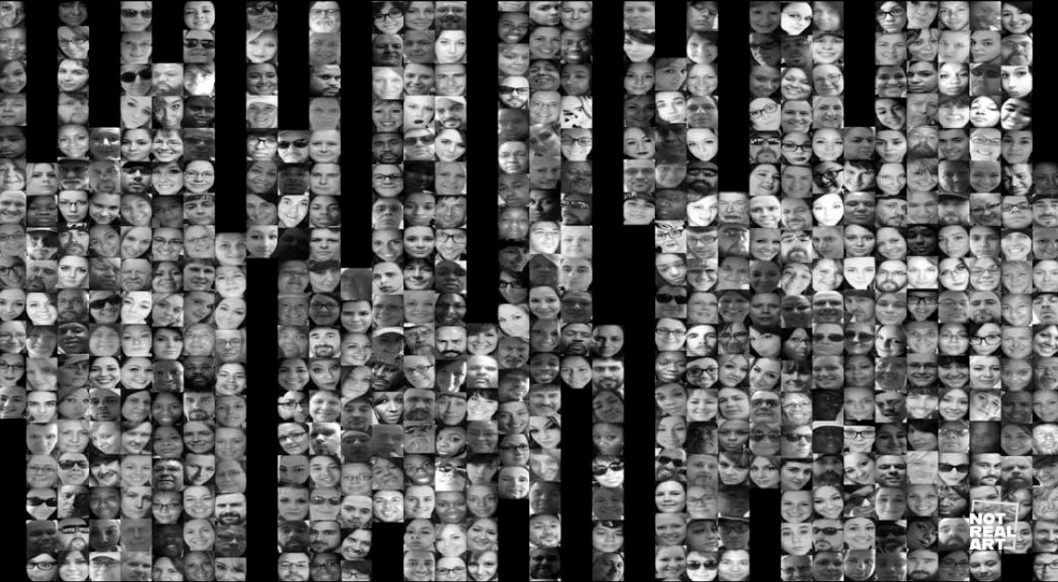 Americans were once wide-eyed idealists who dreamed about jetpack adventures, picnicking on the moon, and a shining (automated) city on a hill. Our robot friends would open doors, whip up tasty desserts, and deliver us from the endless drudgery of backbreaking manual labor. Interdisciplinary artist Kaitlyn Jo Smith—who grew up in rural Ohio’s Rust Belt—knows how far out of reach that future has become for most American workers.

Smith, who now lives and works in Tucson, Arizona, directs our attention to modern labor practices in America with her recent video “Lights Out,” a term used to describe fully automated factories with little or no human presence. These sites operate “without heating, air conditioning, lunch breaks, or unions,” Smith tells NOT REAL ART. Similarly, the portraits of the workers appearing in “Lights Out,” aren’t real people; they’re deep fakes, fabricated by a neural network. “This neural network was trained using a dataset of 50,000 pictures of factory workers that I sourced through Facebook,” says Smith, explaining how her series of algorithms recognize underlying relationships through deep learning, a type of artificial intelligence that mimics the operating patterns of the human brain.

She continues: “As the neural network is fed more portraits to analyze, its deep fakes become more believable.” Read: the network gets smarter over time. This particular network has created a workforce of 60,0000 people—one worker for each American factory shuttered since the year 2000. Organized into columns, the metallic clink of each portrait as it moves across the screen mimics the movement of a conveyor belt, suggesting a future full of consumable products—of which humans are just one of many.

The metallic clink of each portrait … mimics the movement of a conveyor belt, suggesting a future full of consumable products—of which humans are just one of many.

Scroll down to watch an excerpt from ‘Lights Out’ and see stills from the video.