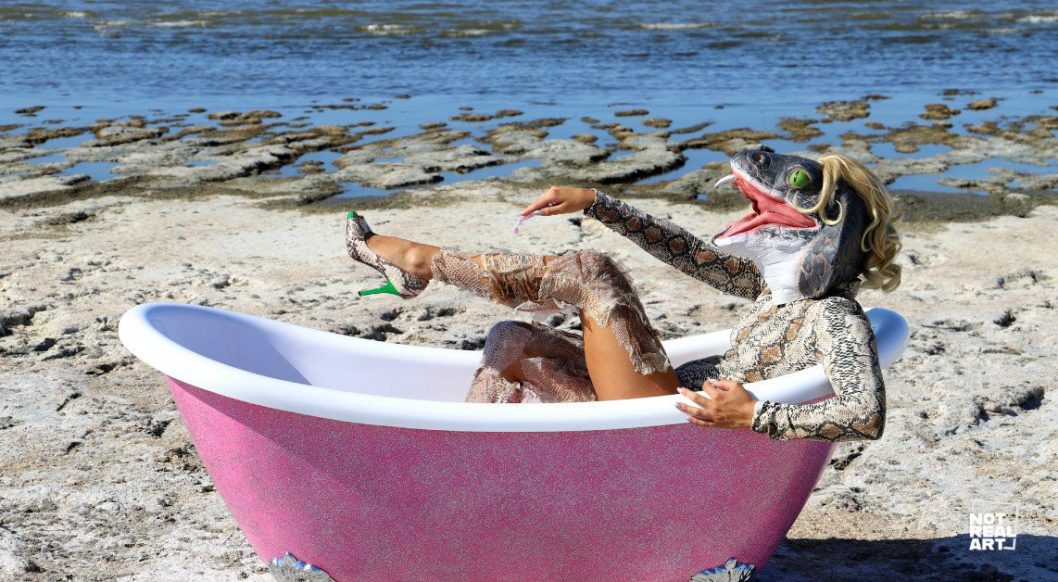 Our fear of snakes is so deep-rooted even babies recoil from images of the slithery creature. Regularly appearing in religious art throughout the medieval period, snakes were negatively associated with “feminine” qualities: manipulation, secrecy, and lust for power. For example, Michelangelo’s version of Eden in the Sistine Chapel casts the story’s snake as a reptile-woman hybrid who seduces Eve into an evil sisterhood.

Marina Shaltout’s Snake Woman, a multimedia installation, explores the laughable expectations placed on women—that they act as both devil and angel at once. “By associating women with fantastical creatures, we create an unrealistic expectation of how femininity should be conducted,” Shaltout explains.

Though Snake Woman is a full installation—complete with pink claw tub and a cardboard Fabio cutout—its scene-stealer is a quartet of wall-mounted videos starring the titular Snake Woman. “Throughout four videos, [Snake Woman] clumsily and awkwardly does her best to fulfill the heavily symbolic gestures of each myth she is performing,” Shaltout says. We see Snake Woman gazing into a heart-shaped mirror (“She Who Turns Men To Cardboard”), shaving her legs in the aforementioned pink tub (“She Who Sheds Her Skin”), doing yoga in heels (“She Who Eats Her Own Tail”), and of course, eating apples (“She Who Eats Forbidden Apples”).

With humor and plenty of camp, Shaltout explores how gender norms affect the ways women are expected to perform femininity: through forced positivity, primping, and self-deprecation. Her work sheds light on the dual pressures of being seen as both virtuous and sinister, and the impossibility of performing both roles simultaneously.

“By associating women with fantastical creatures, we create an unrealistic expectation of how femininity should be conducted.” — Marina Shaltout