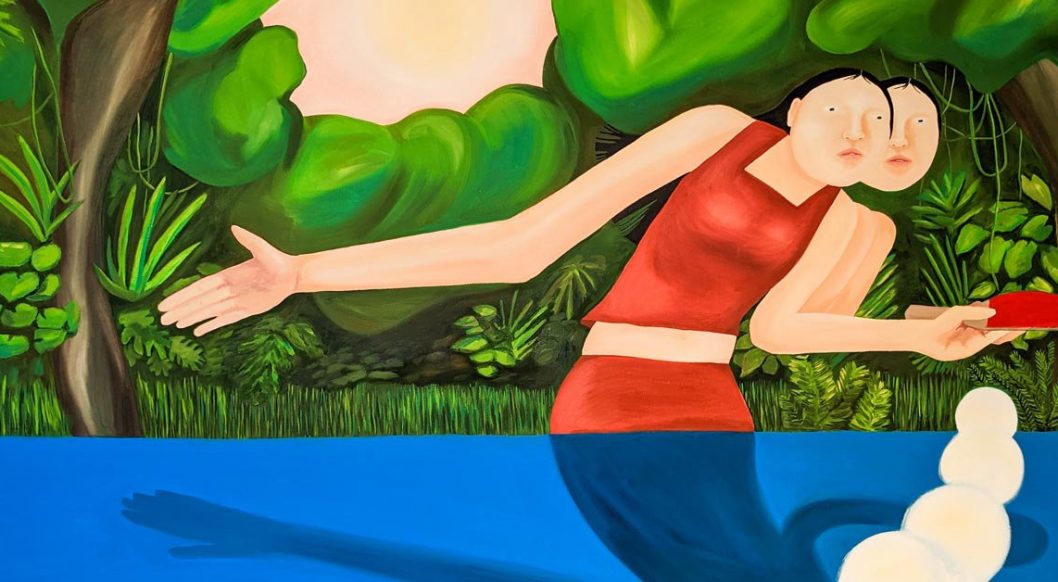 “I started painting Ping-Pong at the start of 2020 when ‘Ping-Ponging’ came up in a conversation with a friend as a way to describe code-switching and bicultural identities,” she explains. “I compare the painted scenes of two players engaged in swift rally, with the ball ambiguously placed or sometimes unseen, to code-switching—the experience of moving between multiple languages, dialects, or vernaculars.”

Yin’s Ping-Pong series spans the pandemic years, reflecting the tumultuous state of the United States and the world during that time. “[My work] was further motivated by the socio-political climate in response to the murder of George Floyd and the racial discriminations and violence towards Asians that happened throughout the pandemic,” Yin says. “I had many conversations with family and friends about the ‘perpetual foreigner’ and ‘model minority’ rhetoric that blankets over Asian Americans.” Overwhelmed by the violence and discrimination, Yin turned to painting to make sense of the daily horrors. “I try to create scenes that can symbolically describe the feelings of displacement, uncertainty, and earnestness that myself, my family, and other immigrant families experience, while still carrying a subtle edge of humor or quaintness, a slight relief,” she says.

Engaged in playful table tennis matches, Yin’s gangly figures reach, bend, and twist to keep pace with the persistent thwack of the little white ball. The matches take place in unexpected environments—among barren hills, on soft green grass, surrounded by windswept trees. “Currently, I am working intentionally with the context and settings surrounding the Ping-Pong matches that I paint,” Yin details. “This is to indicate displacement. By putting Ping-Pong in places that Ping-Pong is not expected to be, I hope to convey a sense of awkwardness and loneliness that comes with being in between identities.” Despite some clumsiness, Yin’s players keep up with the quick game, marking the “sense of triumph or joy that [she] also recognize(s) in the Asian diaspora through the resilience and fortitude of immigrants.”

“By putting Ping-Pong in places that Ping-Pong is not expected to be, I hope to convey a sense of awkwardness and loneliness that comes with being in between identities.” — Yin Ming Wong