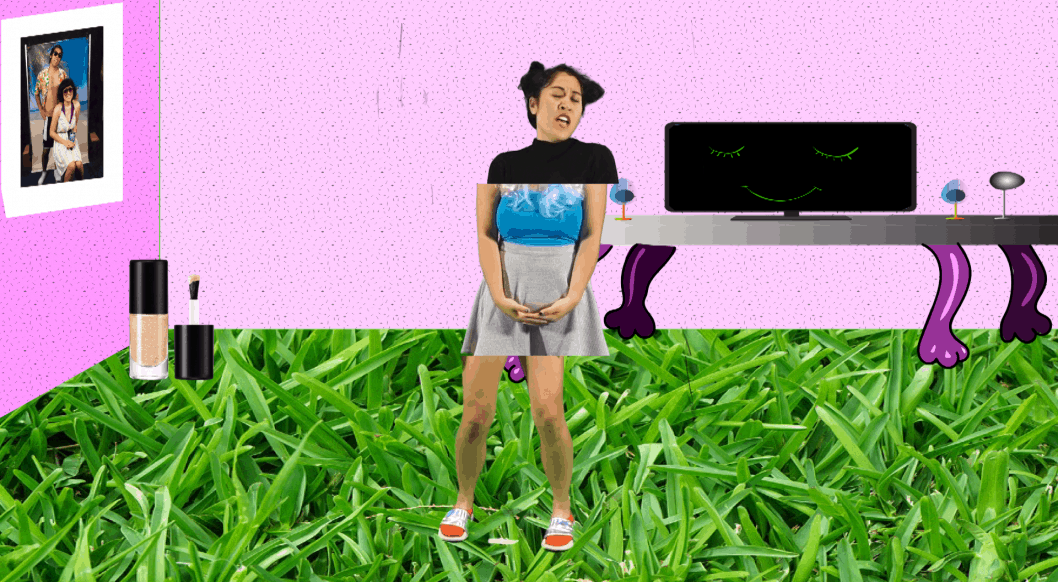 Marguerite Kalhor grew up in Roseville, CA, a small suburban town outside of Sacramento, complete with rural farmland, tract homes, and a mall. “That’s pretty much it,” laughs Kalhor.

In high school, Kalhor was considered weird for making art. When asked if she was bullied for being labeled as weird, Kalhor was unfazed. “I think I was bullied, but I think we were all kind of bullied in high school. Unless you were on the football team or something. But you find your own little crew and support system. I'm still friends with all my friends from high school. They were also pretty weird.”

When Kalhor learned that she had won the Not Real Art grant, she was pleasantly surprised after having applied for more than 15 grants, which generated notes on her work. “Then I got this yes? I was pretty stoked.”

“The best thing about being an artist is having full control over what you're doing.”

As a child, Kalhor began drawing pictures of cats that slowly evolved into comics. “I was really obsessed with cats when I was little. I made this wacky comic about all my friends with pets being superheroes. I was probably six or seven and then took art classes in high school and that kind of helped me not be so academic…I really enjoyed doing it. Then I ended up going to college for it.” Kalhor’s website reads, “My cat drawings earned me a BA in Art (UC Berkeley).”

On a world without art

“That’s a pretty dreary place. Everything kind of looks the same. Maybe it's like Invasion of the Body Snatchers. There is a general agreement among the populace. No one can be themselves.”

For Kalhor, there was never a world without art. “It kind of just followed me my entire life. You know, this is just something that I have to do. It feels weird if I don't do it.”

On the critical voice

“I just tell it to shut up. I look at past work and kind of imagine how I was feeling when I made that at that particular moment in time. Then I just push through it as best I can. Usually, during the process of making the thing that I don't like, a bunch of other ideas will pop up. There is always something that I enjoy when it's all done.

Kalhor is influenced by artists who have a “playfulness and combine good technical craftsmanship in art,” including Amanda Ross-Ho. “That’s a good combination.”

Kalhor’s idea of a wild night on the town is “sitting in my Koreatown apartment with my two cats watching David Lynch's “Dune.” When asked if we would ever see her wandering into a dance club, she laughs. “I would be wandering away from the club into my cave or house. I don't know. I'm an introvert. But I have to be extroverted because I work on set. I force myself to be outgoing.”

On defining beauty in art

“Anything that seems completely out of place, and then is able to exist there.”

Kahlor says that she wouldn’t try to categorize art but could see herself making a list of what Western versions of beautiful art might be. “I think I would define beauty in art as anything that seems completely out of place and then is able to exist there.”

When asked what she finds challenging for artists today, Kalhor shared, “We live in the digital age and your stuff either gets stolen or buried. It’s kind of hard to get out there and there are so many good artists, so it’s hard to set yourself apart from the rest.”

Kahlor says that if she wasn’t an artist, she would be a truck driver. “I like things packed neatly and securely and I like being elevated in a moving vehicle. I'm five-one or five-two and being in a big truck makes me feel taller.

“The best thing about being an artist is having full control over what you're doing.”